Accessibility links
Helping Europe's Firms Embrace the Kyoto Treaty The international Kyoto Protocol to combat global warming takes effect Wednesday. The United States has not signed onto it, but countries in Europe have. Carbon trader Dirk Forrister is helping them figure out how to buy and sell carbon credits. 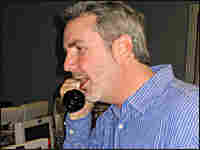 The Kyoto Protocol, the international treaty to combat global warming, takes effect on Wednesday. The United States has not signed onto it, but countries in Europe have -- and Dirk Forrister, a managing director of Natsource Europe, is helping Europe's power companies and other heavy industries buy and sell carbon credits.

Under the Kyoto Protocol, many developed nations have agreed to roll back their emissions of carbon dioxide and other gases that contribute to global warming. One way they hope to achieve the cuts is through "emissions trading." NPR science editor David Malakoff explains what that means:

Forrister's career is intertwined with the fate of the Kyoto treaty. Back in 1997, he was a senior member of the U.S. delegation to the Kyoto talks. His main job at the bargaining table was to convince some extremely skeptical European diplomats that buying and selling the right to pollute was a good way to tackle global warming. The United States had used a similar trading scheme with great success to control acid rain.

Forrister says that since Kyoto, Europe's attitude has gone from reluctance to exuberance about trading pollution permits for carbon dioxide, which is the biggest contributor to global warming.

"Now the U.S. is nowhere on it, and the market is most vibrant in Europe," Forrister says. "It's an absolute stitch, when I think about it."