Accessibility links
Brain Region May Give Early Warning of Risk Researchers say the part of the brain that recognizes our mistakes also acts as an early warning system to keep us from screwing up.

Listen
Brain Region May Give Early Warning of Risk 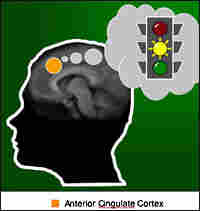 A new theory suggests that the anterior cingulate cortex, described by some as part of the brain's "oops center," may serve as an early warning system -- working at a subconscious level to help us recognize and avoid high-risk situations. Joshua Brown, WUSTL hide caption

Researchers say that the part of the brain that recognizes our mistakes also acts as an early warning system to keep us from screwing up.

Often called the "oops center," this brain region -- formally known as the anterior cingulate cortex -- becomes very active when we do things such as locking our keys in the car, or deleting an important computer file. 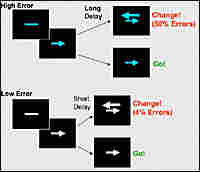 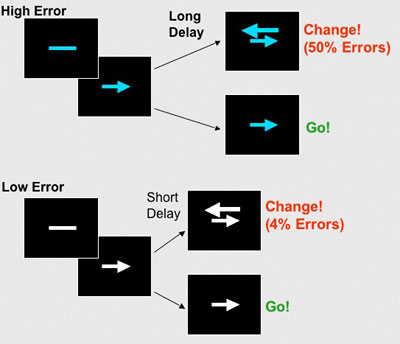 Testing the 'Oops Center': Researchers provided study volunteers with a series of blue or white cues and asked them to push one button or another depending on the direction of arrows. The study had some visual clues built in — a blue arrow appeared when the researchers were trying to induce a mistake. A white dash appeared when they weren't. Though participants weren't told of these clues, their brains eventually picked up on them.

Researchers sometimes slipped in a larger arrow that required participants to change gears and push the opposite arrow. The idea was to have these two competing tendencies — to push the right or left button — create a state of conflict. Some theories suggest that what the cingulate actually detects is this state of conflict.

By increasing the delay before showing the larger second arrow, the researchers raised the odds that a volunteer would reach a "point of no return" and be unable to change gears in time to avoid pushing the wrong button. They then adjusted the time delay over many trials, so that volunteers eventually exhibited error rates of 50 percent when shown an initial blue priming dash, compared with error rates of 4 percent when shown a white priming dash.

Now, scientists say they've found evidence that the "oops center" isn't just detecting errors -- it's trying to prevent them. The findings appear in the journal Science.

The researchers, led by Joshua Brown of Washington University in St. Louis, began with the premise that the cingulate was not responding to the detection of an error or conflict; rather, it was detecting the likelihood of an error.

To test this hypothesis, Brown had volunteers play a computer game that required them to respond to a series of cues on the screen. Participants were shown either a white or a blue dash, which soon changed into a small arrow, pointing either right or left. They were instructed to quickly push one of two buttons, depending on the arrow's directions.

"We actually tricked them," Brown says. "We would tell them, 'OK, now press the left button,' and then just a split second later, we'd say, 'No -- cancel that. Now press the right button.' And the longer we waited to say 'cancel that,' the more likely it was too late and they'd already pressed the wrong button."

The game did offer players some help. A blue dash appeared on the screen when the researchers were trying to induce a mistake. A white dash appeared when they weren't. People playing the game weren't told about the clues, but brain scans revealed that they soon figured it out. The scanner showed that after playing the game for a while, just seeing the blue dash was enough to trigger this part of the brain.

"They'd learned to pick up on the fact that when they saw that color cue, they knew -- or some part of their brain knew, at least -- that they were more likely to make a mistake," Brown says.