Accessibility links
A Virtual Course in Iraqi Arabic Some U.S. soldiers and Marines headed for Iraq will get high-tech help with language skills -- an interactive computer game called Tactical Iraqi that puts virtual troops in situations real troops might encounter in the field. 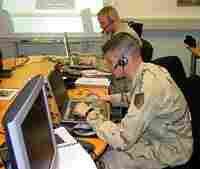 About 100 U.S. soldiers and Marines serving in Iraq will soon have a new tool intended to help keep them safe, and perhaps make their jobs easier -- a computer game designed to teach them how to speak Iraqi-style Arabic. NPR's Ina Jaffe reports on the game's appeal to a new generation of troops already familiar with interactive video games. 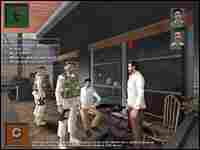 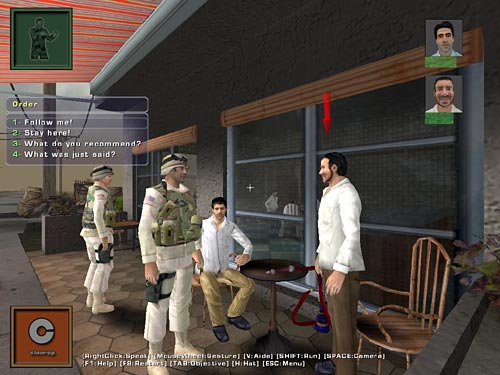 A screen capture from an prototype version of Tactical Iraqi, with U.S. soliders questioning men at a café.

Dr. Lewis Johnson, director of the Center for Advanced Research in Technology for Education (CARTE) at the USC Information Sciences Institute, created the game Tactical Iraqi using the base gaming "engine" used by the popular point-and-shoot game Unreal Tournament, plus voice recognition and artificial intelligence software.

In one scenario, a fictional Sgt. John Smith leads a group of three U.S. soldiers into a café, looking for information. The game's action changes in real time to reflect the actions of the soldiers -- for example, if the Americans barge into the café, refuse to take off their helmets and don't give the proper greetings or show respect, things can go wrong in a hurry.

Johnson says the game isn't any different from a "crash course" in a foreign language -- but the gameplay holds the students' attention better. Sgt. Amy Perkins, an Arabic linguist based at Ft. Carson in Colorado, agrees. She says it's an improvement on methods she's used to teach Arabic to troops in the past.

"Most of... these guys aren't going to sit in a class -- they've got other jobs to do," she says. "This is a computer game -- and all soldiers like computer games."

Information Sciences Institute at the University of Southern California