Accessibility links
A $10,000 Martini at the Algonquin Hotel John Ridley takes a trip to the home of the fabled Algonquin Roundtable to imbibe a gem of a drink: a $10,000 martini, complete with a diamond at the bottom. It's an extravagant cocktail suitable for big events like getting engaged, and just ordering one takes a bit of planning.

Listen
A $10,000 Martini at the Algonquin Hotel 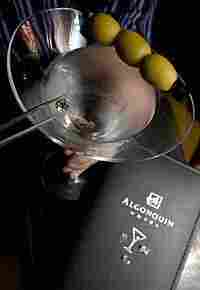 Approximately $150,000 worth of diamonds await a special martini at the Algonquin Hotel in New York City. The drink is listed on the bar menu at $10,000 -- but the actual cost of the beverage is based on the market value of the diamond in the glass. Chip East/Reuters/CORBIS hide caption 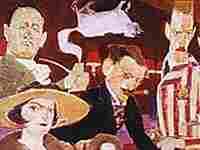 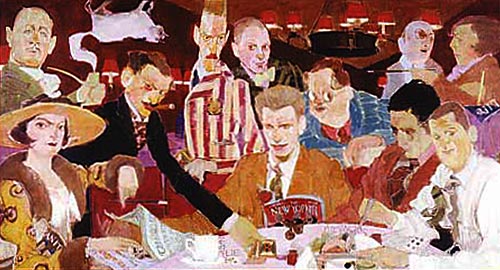 "A Vicious Circle" by Natalie Ascencios, 2002

Even in a city dense with destinations, the Algonquin Hotel in New York City stands out. The landmark hotel, at the heart of "Club Row" in midtown Manhattan, was once the domain of the Algonquin Roundtable -- 1930s notables such as Dorothy Parker, Robert Benchley and Heywood Broun, who gathered to trade bon mots, sharp retorts and a sophisticated sip of spirits.

Their drink of choice recently inspired the hotel to offer its "Martini on the Rock" deal. A drink priced at $10,000 comes with a pre-selected diamond sparkling on the bottom. John Ridley recently sampled the costly cocktail, perhaps the only beverage choice that requires a 72-hour advance notice and a personal visit to the hotel's own jeweler.

What's the point? Hotel officials say it's a perfect way to propose marriage or mark any other special occasion. Nothing says love like a big rock under the olive, right?

And if you're going to spend that kind of cash on a single series of swallows, it's best to choose a drink that can live up to the moment. In Ridley's case, it's the vesper martini, made popular by Ian Fleming's James Bond novels. (Yes, in the Bond films, it was a vodka martini -- "shaken, not stirred." But in the novels, the spy's drink of choice was vodka with a hint of gin and a French aperitif called Lillet.)

The cut of the diamond is important, too -- Ridley chose a 1.52-carat "radiant" cut diamond, considered to be a well-balanced shape that shows off the rock's natural sparkle.

Ridley took the proceeds -- plus a $1,000 donation from the Algonquin Hotel -- and donated the money to the Walter Reed Society, which assists relatives of service members who become patients at the Walter Reed Army Medical Center.

The Operation Iraqi Freedom Family Support Fund, where Ridley made his donation, provides funds for lodging and other related expenses incurred by family members that are not otherwise covered by government funding.

The Algonquin Hotel and the Famous 'Roundtable'
The Walter Reed Society Web Page
The Algonquin Roundtable, Featured on the PBS Series 'American Masters'