Accessibility links
Marian McPartland, Grande Dame of 'Piano Jazz' The guest list of Marian McPartland's Piano Jazz, in its 26th year, reads like a who's who of jazz music, from Tony Bennett, Henry Mancini and Dave Brubeck to Ray Charles and Dizzy Gillespie. And McPartland, now 87, has no plans of slowing down. 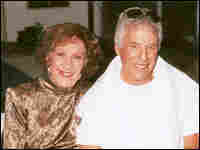 Singer and composer Burt Bacharach is among the upcoming guests to visit McPartland on Piano Jazz. NPR hide caption

For many public radio listeners, it is difficult to remember when Marian McPartland was not hosting her music and chat program, Piano Jazz. 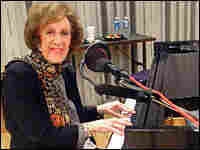 Marian McPartland stops in to give a few piano pointers at the NPR studio. Taylor-Brittany Ford, NPR hide caption

The show, now in its 26th year, boasts a guest list that reads like a who's who of modern music, from Tony Bennett, Henry Mancini, and Dave Brubeck to Ray Charles and Dizzy Gillespie. Even Elvis Costello and Norah Jones have shared time -- and a keyboard -- with McPartland.

McParland is now 87 years old, but she refuses to slow down. In addition to her hosting duties, she maintains a full touring schedule.

McPartland stopped by our studios after two performances at the Kennedy Center. During her visit, McPartland discussed the two pianists who have inspired her: Fats Waller and Bill Evans.