Accessibility links
Flu Fears Threaten Thai Cockfighting Tradition In Thailand, strictures put in place to contain avian flu have imperiled the future of cockfighting, a pastime that many consider an integral part of rural life. 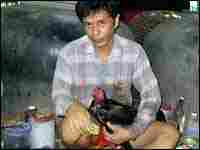 Thai cock trainer Su Chin says new government rules that make it harder for roosters to travel for matches have hurt his ability to make a profit, because birds only rise in value if they win important matches. Jon Hamilton, NPR hide caption

This month marked the start of the Year of the Rooster, but in Thailand, where fighting cocks are considered a national treasure, the rooster has become an embattled creature.

Strictures put into place by the Thai government to stop the spread of bird flu have imperiled the future of cockfighting, a pastime that many Thais consider an integral part of rural life.

Thai officials say they're trying to protect people. So far, only a few humans have been infected -- including at least one owner of a fighting cock. But each new infection increases the chance that bird flu will jump from chickens to humans. Disease experts say that could start a flu pandemic that would kill millions of people around the world. 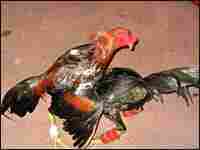