Accessibility links
Gaza Settlers Vow to Resist Israeli Withdrawal Some Jewish settlers in Gaza have accepted the Israeli government's compensation terms for leaving their homes and farms. But many others are vowing to fight the disengagement plan. 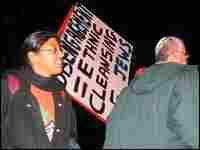 A protester at a nighttime rally in a Gaza Strip settlement holds a sign that reads: "Disengagement = Ethnic Cleansing of Jews." Thousands attended the event. Julia Buckley, NPR hide caption 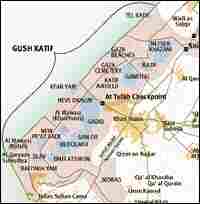 There are an estimated 7,500 Jewish settlers living in 17 settlements in Gush Katif, in the southern Gaza Strip. Map © 2004 The Washington Institute for Near East Policy; Source: U.N. Office for the Coordination of Humanitarian Affairs hide caption

Esther Lillenthal, 68, has lived in the southern Gaza settlement of Neve Dekalim for 14 years. She says she is bitterly disappointed in Prime Minister Ariel Sharon, who previously championed Jewish settlements in Gaza and is now vowing to dismantle them. Julia Buckley, NPR hide caption

The Israeli Cabinet this week approved Prime Minister Ariel Sharon's plan to withdraw all Jewish settlements from Gaza and four small settlements in the West Bank.

Some settlers have accepted the government's compensation terms for their homes and farms. But many others have responded with protests, civil disobedience and some even with threats to Israeli leaders.

Sharon calls the step "very painful but necessary." But many settlers don't believe a withdrawal will occur. Indeed, even as the government solidifies plans for disengagement, more houses are being built in Gaza.

NPR's Robert Siegel continues his weeklong series of reports from the Middle East.

Gush Katif on the Web