Accessibility links
'The Wire: Complete Second Season' Unlike most TV cop shows, The Wire shows viewers how the system really works on the mean streets of Baltimore -- sophisticated criminals who learn from their mistakes, flawed cops who look and act like real people, small victories and ambiguous endings. NPR's Bill Wyman reviews the DVD set of the full second season of the HBO series. 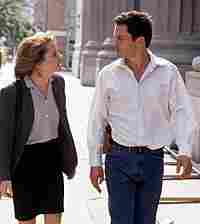 Deirdre Lovejoy and Dominic West in a scene from The Wire. HBO Home Video hide caption

People tend to reflexively deplore the state of television these days -- but for the aficionado, it's a golden age. Granted, HBO is a premium pay cable service, but shouldn't we be grateful that we can now spend our time pondering this pressing question: "Which is better -- The Wire or The Sopranos? 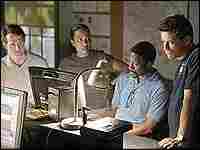 The second season of The Wire, just out on DVD, gives viewers the opportunity to consider differences and similarities between both those great dramas.

The themes of The Sopranos are myriad and deep -- relationships (particularly Tony Soprano's, with the myriad women in his life), capitalism, moral decay, nature vs. nurture and societal rot. The Wire is a different animal. Stripped down and lean, it raises the police procedural to the level of art.

'The Wire' Episode Guide, Cast Bios and More at HBO.com

The Wire can stand with the very best BBC serials. Less rococo than The Sopranos, it is no less intelligent, and likewise demands (and rewards) intense concentration. And where The Sopranos makes grandiloquent homages to gangster-movie predecessors like The Godfather and GoodFellas, The Wire is a little more prickly toward its ancestors. "You've seen TV cop shows," The Wire series creator David Simon seems to be saying. "Here's how the system really works."

And The Wire viewers know that "system" is one full of absurdity, coincidence, good intentions gone awry, the implacable forces of bureaucracy, unforeseen consequences and luck -- of the good, bad and dumb varieties. The producers have also assembled a consistently surprising cast of unconventional-looking actors. Where many shows toss in character actors for flavor, The Wire features nothing but character actors -- humanity has rarely been shown in so many sizes, shapes, colors and varieties of lumpiness.

The second-season DVD set allows viewers to absorb the dense story arc at their leisure. Among other things, you notice the show's subtle handling of race and the whites and blacks involved in the more unsavory aspects of the Baltimore demimonde. We see the black drug lords systematically learning from their mistakes while white criminals stumble clumsily into the arms of the police. And there is also the deeply felt ending, punctuated with some success, some failure, some unanswered questions and little hope for the future.

There are not a lot of features on this second-season collection -- basically just two commentaries. In the first, the season's final episode has a producer and an editor giving an extremely sophisticated and engrossing take on the show's cinematic construction. Disappointing is the second, featuring star Dominic West -- who knew he was British? -- and Michael K. Williams, who plays the ferocious Omar. Williams can barely be heard on the track, and West is too loud. That, combined with the pair's slurred voices and incomprehensible in-jokes, makes the track essentially a waste.