Accessibility links
Lessons from Jazz Legend Wayne Shorter Music critic Michelle Mercer spent nearly three years working on a biography of jazz legend Wayne Shorter. In the process, she learned a lot about Shorter, his music — and the importance of the silence between sounds. 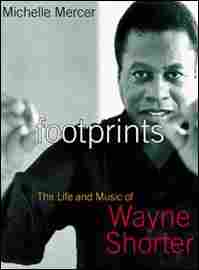 Saxophonist Wayne Shorter has had a long and storied career in jazz. He played hard bop with Art Blakey, explored new styles with Miles Davis and pioneered fusion with his group Weather Report.

Music critic Michelle Mercer has written a biography of Shorter. She says spending time with the artist has taught her quite a bit about Shorter, his music -- and the importance of the silence between sounds.

"Wayne talks like he plays, in a kind of improvised cosmic poetry: there are frequent references to obscure science fiction books and films, and deep thoughts that lead to occasional bursts of insight," Mercer says.

After spending nearly three years on the book, Mercer says she learned her subject's eccentricity is "a way of protecting his creativity. And I realized that even in his most enigmatic moments he was composing some important lessons for me."

Following is an excerpt from Footprints: The Life and Music of Wayne Shorter by Michelle Mercer.

After serving as one of the principal architects of jazz for more than forty years, Wayne Shorter has developed a lofty goal for his music. "At this point I'm looking to express eternity in composition," he says. "I'm striving to open up those people who aren't used to thinking in those terms." It's a Buddhist thing. But in his practice he also seeks enlightenment through earthly desires, and that keeps him real. Backstage before a 2002 show, Wayne preformed his daily ritual chant, reciting the Lotus Sutra and "Nam-myoho-renge-kyo" with deep deliberation. When Danilo Perez thought Wayne was safely immersed in the chanting, he tiptoed into the front of his bandleader’s dressing room and rummaged around for the wine supply. Wayne always has the good stuff. Sensing the intrusion, Wayne finished his chanting. He slipped like mercury into the other room, grabbed the bottle of wine from Danilo, and knocked back a quick "shot" of merlot. He punched the wall a couple of times -- in tribute to Miles's love for boxing, he said -- and then walked out onstage doing a James Cagney impression.

Onstage and off, Wayne wants every note to count, to push the story ahead. "Miles used to bring up Humphrey Bogart in those mystery movies he played in," Wayne said. "Miles would say, 'You see the way Humphrey threw that punch?,' and I said, 'Yeah,' and he said, 'Play that.'"

"Well, I like to make music like that," he continued. "Musical motion pictures without movies. And life has become my own motion picture. That’s some thing." That's a jazz musician’s ultimate act of improvisation.

In Wayne's favorite movie, The Red Shoes, the ballerina protagonist, Vicky, couldn’t make the choice between her husband and dancing, between life and art. Her solution was to throw herself in front of a train; she danced herself to death. I asked Wayne how The Red Shoes might have ended differently. He imagined a modern corrective to Vicky's romantic fatalism, a dancing Buddha character who seemed a little like himself. "The thing with Vicky was that she was a junkie for those red shoes," he said. "When she was hit by the train, she passed away, but even in passing away, according to the principle of eternal karma, she's still locked into the curse of the red shoes, still dancing in death, and can't stop. So maybe here comes another dancer in modern times, tap dancing, and he has his own junkie problems. But he finds a way to overcome his stuff and change poison into medicine, so he can rescue her from the curse. Vicky forfeited her life for art, but this guy saves her when his life becomes bigger than art."