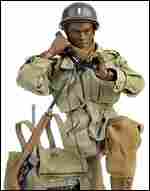 An action figure of 1st Lt. John R. Fox, who posthumously received the Medal of Honor for sacrificing his own life on a battlefield in Italy in order to save his troops. Hasbro hide caption