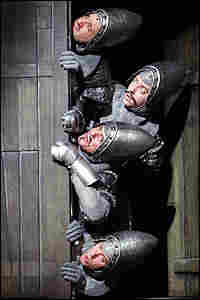 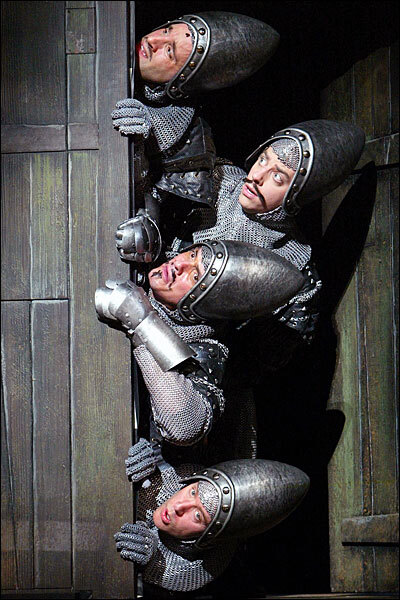 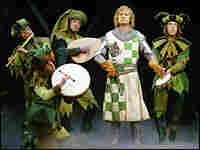 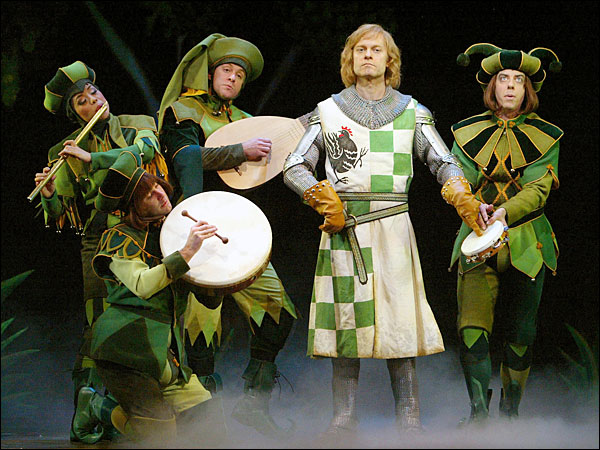 Hear more from the interviews

Eric Idle on working with the other members of Monty Python 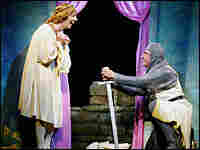 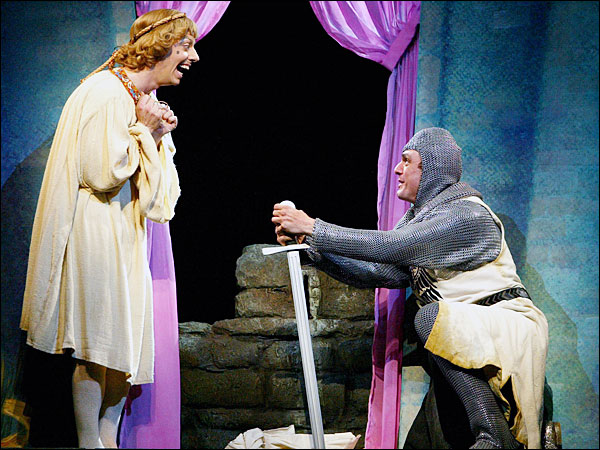 Monty Python and Me

I Reflect in Your General Direction March 4, 2005

From the Knights Who Say "Ni" to killer rabbits with big pointy teeth, British comedy group Monty Python's Flying Circus established a new standard for absurdity on television in the 1960s and '70s.

The troupe's film Monty Python and the Holy Grail has inspired an almost cultish devotion -- generations of moviegoers can quote it, chapter and verse, and a recent survey in Britain rated it the No. 1 English film of all time.

Monty Python's Spamalot -- with a reported budget of $12 million -- is the brainchild of Eric Idle, an original member of the six-man group.

How 'Spamalot' got its name.

We're Knights of the Round Table,

We dance when ere we're able,

We do routines and chorus scenes,

We dine while here in Camelot,

We eat ham and jam and Spam a lot.

— Lyrics from "Knights of the Round Table," from Monty Python and the Holy Grail

In Spamalot, Idle has recast The Holy Grail's recasting of the tales of King Arthur and the Knights of the Round Table for the Great White Way, with the addition of about a dozen new songs.

Azaria was among those enthralled by the daffy charms of Holy Grail as a child. He recalls: "I remember being, like, 13 and getting a hold of some published script version of Monty Python and The Holy Grail and literally being thrown out of math class, 'cause we were memorizing it in the back row and giggling."

Idle also has a new book in stores, The Greedy Bastard Diary, a chronicle of a three-month bus tour of America.

To Canada and beyond!

As I leave home, the tears in my daughter's eyes remind me that this adventure comes with some real costs, and that I stayed home for the first thirteen years of her life for a very good reason.

I try to reassure her that Thanksgiving isn't such a long time away, and I have a sudden flashback of my mother sending me off to boarding school with the same bull----. Even my wife looks sad, which after twenty-seven years with the Greedy Bastard is certainly impressive.

I think of Michael Palin setting out on his great journeys. Mine won't be quite so bold: just to Canada, which is no longer terribly dangerous. Palin is probably in Pakistan at this very moment, eating dog with an Oxford-educated goatherd, interviewing yaks, and having his picture taken in front of a yurst, which is a kind of straw hut used for storing squirrels [Bollocks. -- Ed.] while I am headed for an executive-class seat on Air Canada, but chacun à son goût, as the French say when looking at English food. I feel a bit nervous encroaching on Palin territory by writing a travel diary. I want to avoid any unpleasant sense of stealing Michael's thunder, but most of the Pythons have been involved in documentaries recently: Jonesy walked halfway to Jerusalem in Crusader armor, holding a spear; Gilliam is the tragic hero of a classic documentary about the nonmaking of a movie; and even Cleesy went to Madagascar to invade the privacy of the lemurs. Only Graham has remained quiet. Death will do that to you. That's one of the reasons I am so against it. So, what is this urge by ex-comedians to get out there and examine the world? Are they tired of dressing up as women? Surely not. This tour will be almost my first time onstage drag-free.

For my diary, instead of a coffee-table book, I am planning to publish a dining-table book: a book so large that eight people can comfortably have dinner on it. Maybe it could even be a bedside-table book, or better yet a bathroom-table book with lots of photographs of nude women, but then I don't suppose there will be all that many nude women at my shows.

I am going on a bus tour of North America. Three months, and almost fifty gigs across the entire continent. It may seem a little odd at my age to be heading out on the road, but I have never done this and it seems to have a romantic gypsy feel to it. I like the idea of slipping offstage into a bed that takes me to the next gig, rather than having to line up to show strangers my socks at airports. As Kevin Nealon so brilliantly observed: How selfish and unthinking of the shoe bomber. Why couldn't he have been the bra bomber? Or the panty bomber? Kevin is a spectacularly funny man. Will I still be funny? Was I ever? These are the sort of anxious thoughts that fill my mind as I head for Canada.

I am flying into Toronto because my promoters are also greedy bastards, and it is cheaper to have me flogging my show on TV and pimping my ass to the newspapers than buying expensive ads. In my experience there is nothing you can't do for promoters. It is only with the greatest reluctance that they allow you to spend a couple of hours onstage, away from the relentless interviews.

My Greedy Bastard Tour is kicking off in Rutland, Vermont, in four days' time, a starting point suggested by the Greedy Bastard's agent, who was formerly the head of the Greedy Bastard's record label. Having sold precisely three copies of Eric Idle Presents Nigel Spasm's Journey to the Rutland Isles (a pithy enough title), he has been trying to lure me out on the road in a blatant attempt to flog off the remaining twelve copies that lie unsold in the Artist Direct storeroom (a small closet near Wilshire Boulevard).

As the car searches for fast back routes through L.A.'s increasingly bad traffic, I congratulate myself on not bringing a camera crew. The observer alters the experiment as we all know from our readings of Heisenberg (actually, none), and the thought of having to appear cheery to a documentary crew first thing in the morning makes me sleepy, so I settle down for the first of many naps, unencumbered by the effort of having to make smart one-liners to a lens.

my CD did badly,

The flight to Toronto is on time and half empty or half full, depending on your point of view. The stewardess offers me a can of Spam to sign for her brother while the West slips by beneath a huge, round jet engine, and I am struck by how colorful it is: reds and oranges and blues and tortuous canyons of rivers winding between towering cathedral bluffs. There is nothing at all down there, and I ponder a short fantasy about a tribe of Indians offering a new promised land to the Israelis. In no time they would have it blooming, if not Bloomingdale's, but would they really relocate here if lured by the prospect of easy gaming facilities? And who would the Indian tribe be: the Schmioux, the Dakoshers, or the Moe Hawks, perhaps?

Soon the land below is covered by a rust color, which looks like lichen from the air, before I realize that it is fall. The Rockies have an early sprinkling of snow, which outlines the winding paths of their peaks; an improbable pure blinding white line, snaking among the amber and russet of the forests. The stewardess is in a chatty mood and claims she saw us on our first visit to Toronto -- good God, thirty years ago -- on Monty Python's First Farewell Tour. We staggered off the plane jet-lagged, and as we came through customs there was a tremendous screaming, and we all looked behind us to see which rock-and-roll stars were arriving, only to be amazed by the realization that this yelling crowd was there to greet us: our first experience of the hype that occasionally surrounded Python. It all seemed rather agreeable, and we were placed on top of an open bus and led into Toronto by car horn-tooting fans. Welcome to North America. Not quite the Beatles, but not bad for comedians.

The foregoing is excerpted from The Greedy Bastard Diary by Eric Idle. All rights reserved. No part of this book may be used or reproduced without written permission from HarperCollins Publishers, 10 East 53rd Street, New York, NY 10022