Listen
Amputee Wounded in Iraq to Return to Active Duty 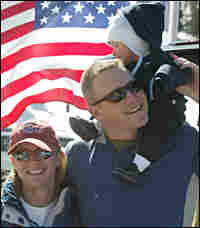 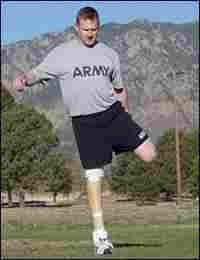 Rozelle had always been a competitive athlete in peak condition. After his injury, he trained even harder. Only one other amputee has been found fit to return to active duty in Iraq. Rozelle will be the first to return. Courtesy of the Rozelle family hide caption

Capt. David Rozelle of the Third Armored Cavalry Regiment will soon become the Army's first amputee from a wound suffered in Iraq to return to active duty.

In the past, it's been rare for soldiers who underwent amputations to go back to war, but better prosthetic arms and legs are now allowing wounded soldiers to do more.

At Fort Carson in Colorado, Rozelle said he knows he's returning both as a fighter and as a role model -- for the soldiers under his command and for other troops with amputations.

Rozelle was injured in June 2003, when an anti-tank mine destroyed part of his right foot and leg. He recounts the experience in a new memoir, Back in Action: An American Soldier's Story of Courage, Faith, and Fortitude. The book's first chapter is excerpted below.

Note: This excerpt contains language that some may find offensive.

Chapter 1: The Price of Freedom

It's not hard to get your mind focused for a mission when there's a price on your head. It was the day that would change my life forever, 21 June 2003, in Hit (pronounced "heat"), Iraq.

Just a few days before, my translator and I were smoking cigarettes and enjoying some hot tea, waiting with a few sheiks for our weekly situation meeting to begin. I was the de facto sheriff of Hit. As we waited for the rest of the sheiks to arrive, we would discuss the Iran-Iraq war. My translator had been a POW in the war, held for eleven years in an Iranian prison. He had been pressed into military service after his third year of medical school and served as an infantryman. As a POW, he found himself doing procedures in prison with no anesthesia, no sanitary rooms, and few medical instruments. His techniques kept fellow prisoners alive, but were often brutal and crippling.

After getting out of prison, he decided to never practice medicine again. He was a good man, and was proud to be of service to those who had freed him for the second time in his life. After taking a long drag on one of my Marlboros, he looked over at me and said in a low voice, "Captain, do not go on your mission tonight."

I was surprised. "I always lead my men," I responded. "It's still dangerous and I want to command on the ground."

He said, "Your men will be safe, but you will be attacked. If you go, it may be your last mission."

"What the hell are you talking about?" I said angrily. In a loud voice, so that the sheiks in the room could hear, I continued, "You're not trying to threaten me, are you? I will destroy any man who attacks me. Tell me who is saying these things—I'll arrest them today!"

He spoke to me carefully, in a low voice so that others couldn't hear, trying to calm me: "Captain, there are men in town who are planning missions in our mosques, under the command of clerics here and from Ar Ramadi. These men I do not know. But they are dangerous. Some are from Iran, and some are from Syria. It's rumored that they have offered $1,000 U.S. to any man who can kill you, the one who rides in the vehicle with the symbols K6 on the side . . . the one who always wears sunglasses. They recognize you as the leader, and as one who is successful and powerful. . . . Please do not go tonight."

I responded out loud, "You spread the word: I am powerful and I command many men. Out of respect for the people of Hit, I have yet to bring my tanks into this city and show you my full combat capabilities. Let the town know that the whereabouts of these terrorists must be reported in order to protect the innocent civilians of this city. I'm not afraid and I'm not threatened."

On our mission that night, we did arrest several suspicious people and killed two men who tried to attack our tanks with rocket-propelled grenades (RPGs). After such a wild night, we decided to stay out of the city for a few days. Unfortunately, we were giving the terrorists more time to prepare their next attack.

It was 1630 hours on the day of my final mission. I could tell when my men were ready because the sounds below changed from bolts charged and orders given during the final pre-combat inspection to laughter and tough talk. I never came down from my command post until I heard the distinctive sound of my high-mobility multi-wheeled vehicle (Humvee), distinctive because each Humvee has its own pitch or hum. Upon hearing that sound, I knew that my windshield and binocular lenses were clean, my maps updated with the most current intelligence, my radios checked, and my personal security detachment was loaded, with weapons pointed outward. With so many antennae and barrels protruding, we must have looked like some strange oversized desert insect. But before I walked down to conduct my final inspection, I continued my tradition of kissing the picture of my wife, Kim, listening to the message she had recorded in the frame, and saying a short prayer to God to take care of my unborn child if I did not return.

Before heading out on the mission, I would walk the line of soldiers to look at their faces. It wasn't just to make a final inspection. They needed to see me confident and unafraid of our impending mission. We treated every mission the same, whether we were conducting a traffic control point (TCP) or were capturing terrorists. My men had to be ready for anything.

A few weeks earlier, my boss had informed me that now that we had "stood up" an entirely new police force, we had to train them in police work. This tasking was a V Corps requirement. I was excited about it, tired of conducting patrols where I spent most of my time watching over my shoulder. Training leads to confidence and job comfort. We had done something historic. Within weeks of the end of major combat operations, we had rearmed Iraqi soldiers and were now patrolling the streets with them. They certainly needed training, and training was our task for the night.

We had scheduled the first night of training to start at 1700 hours, as it promised to be cooler than midday. The sun did not set until 2030 or 2100 hours, so we had plenty of time to train. We had planned on teaching for two hours, which we knew would turn into three or four. We always planned twice the amount of time to do anything with local forces.

It was about 1640 hours when we finally headed out the gate of our compound. I was traveling with two of my Humvees, my own and an improvised gun-truck, and two military police (MP) Humvees. As I crossed through the wire at the lead of the convoy, I called my departure report to Squadron Operations Center and told my detachment to lock and load their weapon systems.

On the squadron radio, I reported, "Thunder, this is Killer 6 . . . Killer is departing FOB Eden to Hit police academy, vicinity soccer stadium, with one officer and twenty-one enlisted."

Changing hand microphones, I immediately followed, "Killer, this is Killer 6, lock and load your weapon systems and follow my move."

After getting acknowledgments from the three vehicles following me, I charged my 9 mm Beretta, watching as the bullet slipped easily into the chamber. As was my custom, as a deterrent to possible wrongdoers, I had my pistol outside the window in my right hand, and my left inside on the Bible my father had given me just before deploying to Iraq. Inscribed on the inside cover were the words, "Use it as a tour guide," and in the back I had pasted a picture of my wife and me with my parents, taken just after our deployment ceremony.

It was only about five miles from our Forward Operating Base (FOB) to the town of Hit. Just before we reached the roundabout at the north end of the city, I told my driver to turn left down a dirt road we often used for observation by tanks at night.

I intended to avoid the roundabout in order to avoid detection from any spies at the first intersection. The dirt road took us from one paved road to another, and was only about two hundred meters in length. Just as we reached the far side, I noticed that the gradual terrace that normally allowed easy access to the road was now steeper and recently graded. Looking over the edge, I decided that the vehicles could handle the drop and we started to ease over the ledge.

As we began rolling again, everything exploded.

My right front tire, just under my feet, detonated an anti-tank mine. The mine violently lifted the Humvee off the ground and set it back on the three remaining of four wheels. The blast was so powerful that most of it went out and up from the front tire, launching a door and tire a hundred meters away. Blinded by smoke and dust, I wasn't sure exactly what had just happened, but I knew we were either under attack by RPGs or artillery, or had struck a mine -- and that I was injured.

I looked down and saw blood on my arms, and through my glasses I could see that my bulletproof vest seemed to have absorbed a lot of shrapnel. Everything was quiet. I could not speak. I was in terrible pain. I heard noises coming from my driver, screams of pain and fear. I was more confused than afraid.

Finally, I got my voice and asked, "Is everyone okay?"

My driver responded with more screams, and my translator simply gave me a crazy look.

We needed to get out of the Humvee. I began to pull at my left leg, but I couldn't get it free. My left foot was trapped under the firewall and heater. The right front portion of the vehicle's frame was now on the ground, so I set my right foot out into the sand to get some footing, in order to pull myself and my left leg free. But I couldn't get any footing.

It felt as if I were setting my right foot into soft mud or a sponge. I looked down to see blood and bits of bone squeezing out of the side of my right boot. I gave one big push and turned to dive into the arms of two brave men who ran selflessly into the minefield to save me.

All I could do was look at the ground. I tried to use my feet, but neither one would bear my weight. I could hear First Sergeant Cobal sighing under the burden of my weight.

Turning now to face Sergeant First Class McNichols, I said, "My feet are messed up."

Sergeant First Class McNichols smiled at me and said, "It's just a walk in the park, sir."

That was the last time I ever used my right foot.

Excerpted from Back in Action: An American Soldier's Story of Courage, Faith, and Fortitude, by Captain David Rozelle. Used by permission of Regnery Publishing.