Accessibility links
Goats in the Kitchen The average American cook knows three things about goats: they are cute and sport fashionable goatees, they make cheese, and they eat tin cans, though the latter has never been authenticated. But goat is also among the most popular meats in the world, and for good reason.

Goats in the Kitchen

Goats in the Kitchen 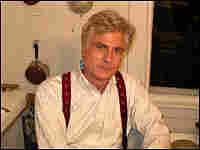 Bryan Miller, author of 10 books about food and wine and a former restaurant critic for The New York Times, is a writer based in New York City. hide caption

The average American cook knows three things about goats: they are cute and sport fashionable goatees, they make cheese, and they eat tin cans, though the latter has never been authenticated. But goat is also among the most popular meats in the world, and for good reason.

Contrary to common perception, goat (or kid, really, which is a young goat) is not gamey at all, and it does not taste a bit like chicken! What's more, goat is healthful. Put aside your South Beach Diet t-bone; goat is high in protein and very low in fat: It has 143 calories per 100 grams, compared with 305 for beef and 223 for chicken.

Because the meat is so lean, especially the leg, it is often marinated or rubbed with spices then refrigerated overnight before cooking. All parts of a goat are excellent cooked on a spit over a large mound of red hot embers, although apartment dwellers might consider roasting or braising their goats.

It's unlikely that you'll find a goat in your local supermarket. Most chefs buy them from ethnic markets, especially Middle Eastern stores. Ask for a kid weighing up to 14 pounds and have it butchered into shoulder, hindquarter, ribs and legs.

The whole goat -- including the scary looking head, which actually contains some succulent meat -- can feed up to 10. The leg alone can serve anywhere from two hungry aficionados to four wary novices who "just want to pick." The shoulder and the rack yield the most meat. You can remove the meat (or have the butcher do that) and make kebabs.

There are as many ways to season goat as there are people who cook it. Probably the best-known recipe is Jamaican "jerked" goat. There is no pulling and tugging here, rather, the term refers to a mix of seasonings combined to make a paste or rub. Ingredients vary, but they typically include allspice, nutmeg, cinnamon and minced hot peppers. The rub is worked into the meat, which rests overnight in a refrigerator before roasting.

Without question, the best roasted goat I've ever tasted was at a highly regarded restaurant in Philadelphia called Vetri. Marc Vetri, the chef-owner, is a fervid goat promoter, spreading the gospel of this unheralded meat. When I dined there last, he roasted the meat along with some milk, which caramelizes the pan juices to create a rich sauce.

I spoke with him the other day, and he reported that, after nine months of dogged experimentation with seasonings and cooking techniques, he has reached goat nirvana. In brief, it involves seasoning it well and slowly cooking the goat over varying temperatures.

Chef Vetri offers this technique for home cooks: "The goat should not be larger than 14 pounds (the butcher can section it). Season the meat with salt and pepper, or whatever you prefer, and place it in a large roasting pan, covered, at 325 degrees for three or four hours (until tender). Turn up the heat to 450 for about 20 minutes, or until nicely browned."

Here is a typical recipe for Caribbean jerked leg of goat. It is also delicious with other parts of the goat, and with chicken.

· 4 to 6 cloves of garlic, finely chopped

1. Mix or puree together the onions, garlic, soy sauce and spices to form a paste.

2. Pierce the leg of goat and rub the paste over the meat; cover or wrap in foil and refrigerate overnight. (Any unused paste can be stored in a glass jar in the refrigerator for up to a month.)

4. In a large pan (cast iron is best) on a hot stove sear the meat well on all sides.

5. Cover meat loosely with foil and cook for one to two hours or more depending on weight -- until the internal temperature reaches 150 to 160 F. Remove the foil for the last 15 minutes of cooking.

Note: If you use a tougher cut, such as a neck roast, marinate the meat in a mixture of beer and lemon juice overnight. Apply the rub in the morning and refrigerate for four more hours.