Accessibility links
Americans' Insatiable Hunger for Celebrity Chefs The cult of the TV celebrity chef has created multimedia empires, but it has also helped transform the way Americans think about food.

The cult of the TV celebrity chef is larger today than ever before. It is now possible for chefs to reach millions of people through a multimedia empire -- with books, restaurants, TV shows and even commercial endorsements.

Chefs have become so big that some -- like Emeril Lagasse, the current titan of TV chefs -- are recognizable by one word alone. Lagasse says he's amazed at how much things have changed just in the last 10 years.

"Chefs weren't really respected other than being in the kitchen," Lagasse says. "You rarely saw them in the dining room interacting with people… Now all of a sudden, people have started looking at chefs and saying, 'Wow! That person really is a craftsman, is really a business person, they can do publicity.'"

That publicity has helped some create cooking empires -- books, TV shows, cookware lines and restaurants that pack in the crowds.

Ruth Reichl, editor of Gourmet magazine, says that in our celebrity-obsessed culture, many of these diners are seeking a personal connection as much as a good meal. "The more people can identify with these chefs, the more they want to go to their places, buy their books, have some kind of contact with them," Reichl says.

Linda Carucci, curator of food arts at COPIA, the American Center for Food, Wine and the Arts in California's Napa Valley, says the rise of celebrity chefs has made people more aware of the foods they put into their bodies. It's also helped draw more men to her cooking classes -- and, she says, they talk about their favorite chefs the way other guys might talk about football stars.

"They're rabid about it," Carucci says. "I mean, they talk about them like they're on a first-name basis." 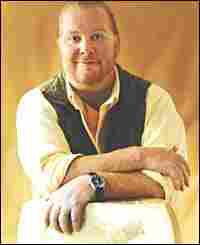 Mario Batali, host of the Food Network's Molto Mario and Mario Eats Italy, says celebrity chefs have definitely had an impact on the evolution of the American diet. Beatriz Da Costa hide caption

Celebrity chefs may grab all the headlines, but it's the unsung working stiffs that end up feeding most of America. Commentator Betsy Block pays tribute to the country's un-famous hash slingers — and shares two recipes from Bob Sargent, one of her favorite working chefs: 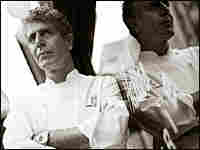