Accessibility links
An Ode to Hash Slingers Celebrity chefs may grab all the headlines, but it's the unsung working stiffs that end up feeding most of America. Commentator Betsy Block pays tribute to the country's un-famous hash slingers.

An Ode to Hash Slingers

An Ode to Hash Slingers 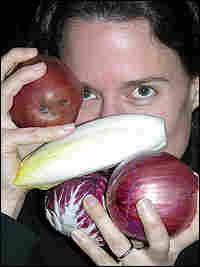 Betsy Block is a Boston-based freelance writer. Her work has appeared in Gourmet, The Boston Globe and other publications. She stays out of the kitchen whenever possible. Andrew Pockrose hide caption

He's handsome, charming and charismatic. When he enters the room, heads turn, eyes widen. Is it suddenly hot in here, or is it just you? Because, ladies and gentlemen, the chef is in the house.

You know, the one you've seen on TV or grinning back at you from the cookbook aisle? The one you thought was already in the kitchen cooking your dinner? Sure, he graduated at the top of his cooking school class and then opened his own restaurant to widespread acclaim, but that was eons ago. Now he's way too busy getting ready for a photo shoot to worry about how you like your steak.

Recipes from an Unsung Chef

Block shares two recipes from Bob Sargent, the chef at Flora, a restaurant in Arlington, Mass.:

That task falls to -- well, usually to the home cook, since most nights, we're the ones putting food on the table. But by buying these chefs' books and watching their shows, we can learn how to cook gourmet meals for ourselves. Teach a woman to grill and she can have perfectly charred, juicy, medium-rare steak for a lifetime, right?

Wait a minute. Aren't these people, these chefs, supposed to be expertly preparing our meals? Instead, they're not only telling us how to cook it ourselves, they're also charging us for their advice. Making us watch them vogue for the camera when we know that later, even though we'll be exhausted and hungry, we'll have to stir our own soup. Something's gone awry.

That's why it's good there are still chefs like Bob Sargent, owner of Flora in Arlington, Mass. You haven't heard of him? Of course not. That's because he, along with thousands of other sweaty, stressed-out professional cooks, is not on TV. He's at the stove cooking dinner.

Sure, Bob can be a little brusque at times, he's a tad wild-eyed and he often stays up until 3 a.m., but these are not uncommon traits among chefs. With Bob and his ilk, there's no false charm, just hard work. Oh, and great food, like wild mushroom soup and maple-brined pork or a caramelized pear and red onion salad with Stilton cheese. Food that's simple but not easy, homey but still a treat.

And Bob isn't alone. Far from it. Aside from the millions of us tired working stiffs turning out meal after meal (after meal), there are lots of these unsung hash slingers all over the country. All over the world! Chefs and sous-chefs and chefs de cuisine, line cooks and prep cooks and garde mangers, and let's not forget the dishwashers.

While the celebrity chefs are off "cooking" at "events" on tropical islands, these other folks are the ones fighting with purveyors over limp spinach and cleaning the basement after a flood. They're the ones who don't need all eyes on them when they walk in the restaurant; who, come to think of it, don't walk in the front door at all, but rather, come in the back and quietly slip on their clogs. The ones who are never as at home as they are when they're cooking delicious meals -- hopefully and on a good day, for us.

This is an ode to the non-celebrity chefs out there, both professional and not, the ones feeding us day after day and year after year. The ones who don't ask that we feed them back.