Accessibility links
Artist Captures Wonder of Natural Phenomena Artists use their creativity to reveal the world in new and sometimes unexpected ways. Artist Ned Kahn's work focuses on the physical world. From the harmonies of randomness to the dynamics of Earth's crust, Kahn uses scientific principles to create art. 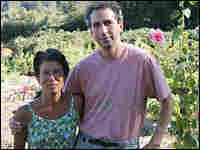 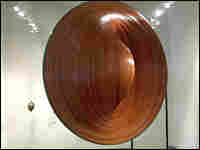 "Encircled Void," a wood turbine made of teak that was steamed and bent into an inwardly spiraling warped surface. The sculpture was one of several of Kahn's works recently on display at the Sebastopol Center for the Arts in Northern California. Satri Pencak hide caption

Artists use their creativity to reveal the world in new and sometimes unexpected ways. Artist Ned Kahn's work focuses on the physical world. From the harmonies of randomness to the dynamics of the Earth's crust, Kahn uses scientific principles to create mesmerizing works of art.

Kahn started out in college as a botany major, but gave up when he saw the three-inch-thick textbooks filled with Latin names. After graduating from the University of Connecticut, he headed west. One day he stumbled into the Exploratorium, a San Francisco museum dedicated to the natural world and the forces that shape it, and he was hooked. He begged for a job and was offered an apprenticeship with one of the machinists who built the exhibits.

Kahn's first piece for the museum was enormously popular -- a metal bar dipped into a trough of soapy water, then hoisted into the air by ropes on either side. A giant film of soap would stretch from bar to trough. With just the right lighting, patterns and colors would reveal themselves dancing across the film.

Dozens more exhibits followed. Chaotic pendulums, smoke vortexes, wind-sculpted dunes. Most of the pieces are visual, but some are musical.

One such work, on display recently at the Sebastopol Center for the Arts in Northern California, consists of a spinning disk and tiny steel bearings. The balls drop through a grid of nails, creating tinkling musical sounds as they fall. Kahn says the work had started out as a math demonstration, "but the sound these nails made in this board was compelling."

Kahn says he's most satisfied when people see his work and share that sense of wonder and delight that he feels for the processes of nature.

"I've tried to create things where I've basically framed a phenomena, and I'm letting nature do the sculpting," he says.