Accessibility links
Trucking Jobs Go Unfilled as Economy Improves Trucking companies often thrive when the economy heats up. But a driver shortage has been keeping many firms from reaping all the benefits of a growing business. Companies like Schneider National are trying to attract new workers to an old business. 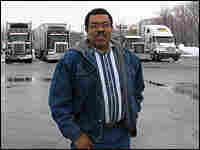 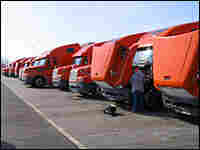 At the Schneider headquarters in Wisconsin, rows of trucks wait to be taken out on the road. Jack Speer, NPR hide caption 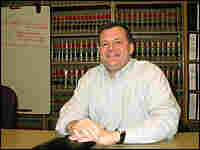 Trucking companies often thrive when the economy picks up. But a driver shortage has been keeping many firms from reaping all the benefits of a growing business. Despite pay increases and programs meant to ease the burden of being away from family, drivers are quitting -- and new ones are hard to find.

At a truck stop outside Greenbay, Wis., Melvin Vickers, who drives for JB Hunt, says that after nearly four years, he's ready to call it quits. "It's hard on a family… on Valentine's Day I just recently got engaged. So I'm getting out of the truck."

Veterans like Ted Soharto, a driver for 30 years who owns his own truck, says the business has changed. "I think it's time to retire -- I don't like what I'm seeing out here." Soharto says he doesn't like many of the new drivers, some of whom he says don't take safety seriously enough.

Schneider National, one of the nation's largest trucking companies with around 15,000 drivers, has embarked on an aggressive hiring program. Vice President of Operations Todd Jadin says Schneider would like "to grow the driver fleet between 500 and 1,000 drivers" for its bright orange trucks.

In an attempt to reach that goal -- and retain employees -- Schneider last month instituted the biggest pay hike in its 70-year history, an average of $4,000 a year. In the industry, long haul drivers now make an average of around $40,000 yearly. Schneider has also been recruiting more in urban areas, and has increased hiring of older workers.

Those who follow the industry, however, say the shortage of truck drivers is likely to continue, especially if the economy keeps improving. Estimates predict a need for 60,000 new truck drivers a year through 2012.