Accessibility links
M.I.A: Activism with a DIY Hip-Hop Beat The music of M.I.A, a young hip-hop artist who grew up in Sri Lanka and South London, bridges the gap between her war-torn past and her urban present. Day to Day music critic Christian Bordal reviews her CD, Arular. 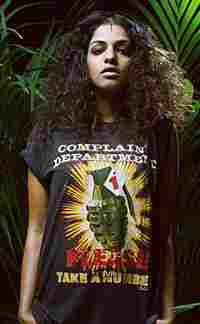 'Pull Up the People'

In Sri Lanka, tens of thousands were killed in the devastation of the recent Indian Ocean tsunami. The island nation of some 19 million people off the southern tip of India has already suffered from 20 years of civil war between the Tamil minority and the majority Buddhist Sinhalese.

Day to Day music critic Christian Bordal relates the inspirational story of M.I.A -- a young hip-hop artist who grew up in Sri Lanka and South London. Her music bridges the gap between her war-torn past and her urban present.

The first full-length CD from M.I.A -- born Maya Arulpragasam -- is called Arular after her father, a Tamil revolutionary. And beneath the CD's veneer of pop and dance beats are vivid, clashing images of war, cultural displacement and party life.

M.I.A says she had an idyllic childhood until the civil war intervened -- her father joined the Tamil fighters, and she and the rest of her family relocated to Britain, settling in a housing project in the south end of London. She blossomed in art school as a teen, and developed her own unique style of music -- a "do-it-yourself" aesthetic inspired by the British club scene, with stripped-down bass and drum rhythms driving catchy melodies.

M.I.A built her own tracks for the Arular CD at home on a simple sequencer, then enlisted the help of producers such as Steve Mackey, formerly of the British pop band Pulp, to help flesh out the final tunes.