Accessibility links
Wounded in War: The Women Serving in Iraq In the war in Iraq, no one is truly behind the front lines. A large number of women soldiers are among the wounded, suffering from burns and broken bones, lost limbs and disfiguring scars. We meet three such women at the Brooke Army Medical Center facility in San Antonio, Texas.

Listen
Wounded in War: The Women Serving in Iraq 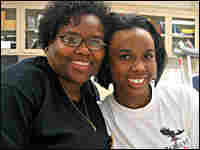 Connie Spinks, pictured with her mother, Annette, was wounded the day after her 22nd birthday. A car bomber collided with the Humvee in which Connie was riding in northern Iraq. Annette says her husband deeply regrets letting Connie join the Reserve. Steve Lickteig, NPR hide caption 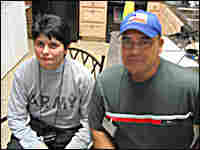 Connie Rendon, shown with her husband Hector, was 40 when she was wounded in an ambush on her truck north of Baghdad. Shrapnel broke her jaw and is still embedded in her face. Her hands were burnt and broken, her ribs smashed; one lung collapsed. Steve Lickteig, NPR hide caption

As the war enters its third year, essayists look at Iraq today. Several see freedom rising, others a quagmire.

More than 1,500 U.S. military personnel have died in Iraq since the U.S. invasion began two years ago, but nearly four times as many have been wounded in combat too seriously to return to duty.

For the first time in American history, a substantial number of the combat wounded are women -- in part because the front lines in this war can be anywhere.

Caring for the Wounded: The Story of Two Marines March 9, 2005
Amputee Wounded in Iraq to Return to Active Duty March 4, 2005

As part of our Span of War series marking the two-year anniversary of the war in Iraq, NPR's National Correspondent Linda Wertheimer visited with some of the women who are recovering from severe wounds at the Brooke Army Medical Center in San Antonio, Texas.

This site provides historical information on women's contribution to the U.S. military from the American Revolution onward.

By the Numbers: Women in the Military

· One in every seven troops in Iraq is a woman.

· 88 female military nurses were captured and held as prisoners of war.

· Navy, Air Force and Army nurses accounted for 80 percent to 90 percent of the total number of women who served in Vietnam.

· Majority of U.S. women serving were in their early 20s. When they returned to the United States, they received the same hostile treatment as did men returning from combat duty.

· 48 percent of women Vietnam veterans are expected to experience post-traumatic stress disorder at some point.

· In January 1991, more than 33,000 servicewomen deployed to Southwest Asia during Operations Desert Shield and Desert Storm.

· 13 servicewomen were killed and two were held as POWs.

Sources: Department of Defense; the Women For Military Service in America Memorial in the Arlington Cemetery.