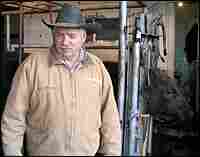 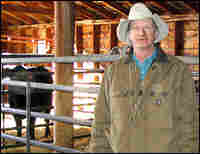 Bill Donald, president of the Montana Stockgrowers Association, in his calving barn in Melville, Mont. He says Canadian beef is safe and that a continued ban on Canadian cattle imports is unfair to Canadians and U.S. consumers. Greg Allen, NPR hide caption

Nearly two years after the U.S. banned cattle imported from Canada because of mad cow disease, a federal judge recently postponed the U.S. Department of Agriculture's reopening of the border.

A U.S. ranchers group that brought the suit to stop reopened cattle trade with Canada says it is trying to protect the health of U.S. cattle and consumers. But others in the industry say the suit is meant to keep out competition.