Accessibility links
'World of Warcraft:' An Online Treasure Hunt World of Warcraft, a new multi-player online game, has participants including reviewer Robert Holt captivated. He says the highly stylized fantasy world may be the best role-playing game yet. 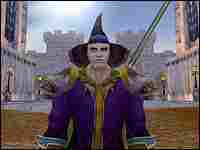 Galt, a warlock, is reviewer Robert Holt's character. Here he stands in front of the gates of Stormwind City. Blizzard Entertainment hide caption 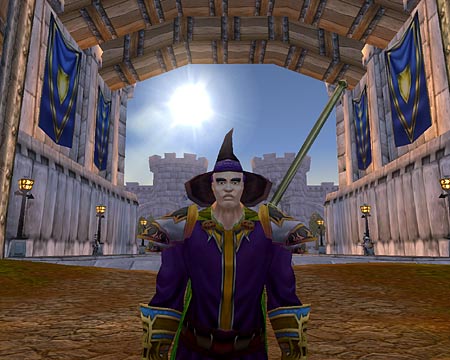 Galt, a warlock, is reviewer Robert Holt's character. Here he stands in front of the gates of Stormwind City.

World of Warcraft, a new multi-player online game, has participants including reviewer Robert Holt captivated. He says the highly stylized fantasy world may be the best role-playing game yet.

The game's biggest flaw is that it's too popular -- and there are times when the servers are overloaded and the game is unresponsive.

For Npr.org, Holt discusses the evolution of role-playing games, from Dungeons and Dragons to WoW.

What it Takes to Play

System Requirements: Windows 98/ME/2000/XP: 800 MHz or higher CPU, 256 MB or more of RAM, 32 MB 3D graphics card with hardware transform and lighting, such as GeForce 2 or better, 4 GB of available hard drive space, DirectX 9.0c or above, 56k or higher modem with an Internet connection.

'Warcraft' Latest in a Line of Role-Playing Games

Role-playing games have their roots in fantasy novels like J. R. R. Tolkien's The Lord of the Rings. Dungeons and Dragons, a pen, paper and dice role-playing game invented over 30 years ago is the predecessor of video RPGs.

In role-playing games, you create a character -- one that's not necessarily like you, but one that suits your style. This character can be one of many different races, and it can be many different things -- a wizard or mage, a thief or rogue, or just a plain fighter. The goal of the game is to go on adventures with groups of friends, finding treasure and gaining experience that makes your character more powerful as he attains new levels. All the while acting like this character -- and not necessarily you -- would act.

A large part of role-playing games involves calculations, and that takes the person out of the role. When you say, "I attack the gnoll" -- you then need to roll a die, and then make calculations as to whether you actually hit the beast, and how hard.

Computers were a natural fit to replace the tedious aspects of RPGs. The dice rolling and calculations still happen, but behind the scenes so that you're never taken out of the action. The first result of this marriage of computers, multiple-players and RPGs were text-only online games called MUDs. or Multi-User-Dungeons. These MUDs dominated college mainframes in the late 80's and early nineties. Then came EverQuest -- which still had all of the dice rolling, but added a 3-D graphical interface that depicted the results of the calculations. You still could see text in the window that says, "You hit the gnoll for 35 damage," but you can also see your sword slamming into its face, and hear him cry out in pain. EverQuest was highly successful in its time, and I tried to like it, but it was incredibly clunky, and boring. You spent the first 10 hours killing rats and snakes and other low-level creatures to gain experience.

This is not the case with World of Warcraft (WoW). As with almost every Blizzard title, the game is highly polished, has an intuitive interface, and is simply beautiful to look at and listen to. A team of over 30 artists worked on the game's visuals, and it shows. The art is highly stylized -- the world doesn't look entirely realistic, and that's on purpose, as I found out through the behind the scenes DVD that came with the collector's edition of the game. EverQuest II, the sequel to the pioneering EverQuest, tries to look realistic, and for that reason you notice the flaws a lot more when it fails. The stylized visuals of WoW somehow make it easier to suspend your disbelief, and immerse you in the world.

And immerse you it does. Let me warn you -- this game is highly addictive. In the two months I've been at it, I've logged over five days of playing time. And I've stopped watching TV altogether.

Of all the online role-playing games out there, this is the best. All of the others, especially EverQuest II, pale in comparison. EverQuest II's interface is clunky, and there's a lot of grinding -- the act of killing the same type of monster over and over again to gain experience. In contrast, WoW's quest system starts you off right away with purposeful missions. There are multiple story lines that advance as you complete quests.

There's also the overarching battle between factions of players. When you create a character, the race you choose decides which side you're on -- Alliance or Horde. Players of both factions exist in the same worlds and can battle each other.

The interface just feels right. It lets you get down to the business of role playing, and doesn't get in the way.

In WoW, interaction with other players is essential. There are certain quests that cannot be finished solo. The human element adds a lot of spice to the game. These are the shining moments of the game, when you're deep inside a dungeon with four other real people, and the unexpected or the heroic occurs.

It's easy to take on your role in the game, because other players can't see or hear you, they only see what you make your character do.

Massively multi-player online role-playing games (MMORPGs) have their own vocabulary and etiquette. There are very specific, unwritten rules around almost every aspect of player interaction. It's tough to know what they are, but other players will let you know if you've violated them.

World of Warcraft is the best online roleplaying game to date. It's a pleasure to be immersed in this deep, beautiful and ever-changing world. Now, other games seem rather flat without human interaction. I'll be playing this game for a long time. You can find me on Feathermoon-look for a Warlock named Galt.