Accessibility links
Artist Known for Ephemera Creates Slate Landscape Andy Goldsworthy, a sculptor best known for impermanent works in nature made of leaves, rocks and even ice, has created a permanent slate structure for the National Gallery of Art. To do so, he studied optics and physics to create a series of domes that should stand forever without any cement. 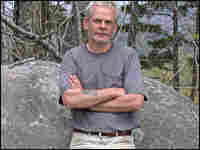 Artist Andy Goldsworthy is best known for working alone in nature, making fragile, temporary sculptures from leaves, rocks, even ice. The sculptor works quietly for hours in each place, a process captured in the 2001 documentary Rivers and Tides. 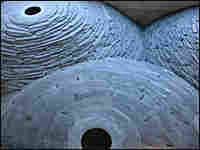 An overhead view of "Roof," Goldsworthy's new sculpture for the National Gallery of Art in Washington. A series of nine domes, the work was made using slate from local quarries that have also provided materials for some of D.C.'s historic buildings. Susan Stone, NPR hide caption

Photographs of Goldsworthy's work hang in galleries and museums around the world. His latest project is a permanent piece in the center of Washington, D.C., commissioned by the National Gallery of Art.

This structure made of leaves is topped by a black hole similar to those seen on the domes of "Roof."

Goldsworthy sees similarities between the stick dome carried away by the water in this clip and the stream of traffic and people that pass by "Roof."

Goldsworthy mastered optics and engineering to create a series of domes constructed of slabs of slate designed to hold together permanently without the use of any cement.

The project, called "Roof," took Goldsworthy nine weeks of work to complete, spread out over a period of four months. The sculptured features nine domes rising from an area outside the Gallery's East Building. Each dome, topped by a black hole, measures 6 feet high and 28 feet across. The gallery, which was designed by IM Pei, features sharp vertical lines and light marble that contrast with the rounded forms of rough-hewn stacked slate.

Domes and black holes are themes Goldsworthy has repeated in his work for decades, whether executing them in leaves, sticks or stacked slate. They are forms that echo throughout the natural world, from the largest galaxies to the smallest cells.

"The underlying tension of a lot of my art is to try and look through the surface appearance of things," Goldsworthy says. "Inevitably, one way of getting beneath the surface is to introduce a hole, a window into what lies below."

Susan Stone followed the creation of Goldsworthy's new sculpture for the latest installment of our series on the intersection between science and art.

Goldsworthy talks about the process of creation and the transfer of control in his work.

Goldsworthy describes the difference between making ephemeral works out of substances that will decay and fall apart, and permanent works from stone and slate.

Goldsworthy talks about the effect that making the sculpture "Roof" will have on him personally and creatively.