Accessibility links
Philadelphian Amos Lee's Country-Fried Soul Singer-songwriter Amos Lee grew up around Philadelphia, but the former teacher and bartender's music sounds more like he came from a background of porch swings and wide-open spaces.

'Arms of a Woman'

'Lies of a Lonely Friend'

Singer-songwriter Amos Lee grew up in a tough neighborhood near Philadelphia, but his music doesn't have an urban feel. 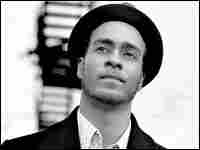 He writes songs that make you think he came from porch swings and wide-open spaces. Lee says he found his musical voice when he left the big city to attend college in South Carolina. He developed a falsetto style while singing along with Stevie Wonder records, he tells Michele Norris.

After returning to Philadelphia, Lee worked as an elementary school teacher, then as a bartender. Bartending should offer a lot of material for a songwriter, but he jokes, "I just found that I drank too much, really..."

At open mic nights, he honed a style of country-fried soul that caught the attention of Bob Dylan, who asked Lee to join his current tour. And Norah Jones played piano on Lee's self-titled debut CD.

One of his songs, "Arms of a Woman," is about the loneliness of being away from a loved one. In a society where people travel so much, Lee says, "you never really get a chance to sit down with the people you love, unless you really make an effort to do it. It doesn't just happen naturally anymore."