Accessibility links
A Public Man Must Live in the Present From 1955, President Harry Truman explains the beliefs that shaped his two decades of public service and encourages Americans to correct the remaining imperfections in our democracy.

Only Available in Archive Formats.
A Public Man Must Live in the Present

A Public Man Must Live in the Present 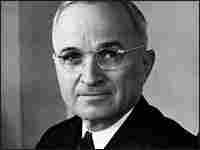 Harry Truman was the 33rd president of the United States, serving from 1945 to 1953. Born and raised in Missouri, Truman was a farmer, businessman, World War I veteran and U. S. senator. As president, his order to drop atomic bombs on Japan helped end World War II.

I believe in a moral code based on the Ten Commandments found in the 20th chapter of Exodus, and in the fifth, sixth and seventh chapters of the Gospel according to St. Matthew, which is the Sermon on the Mount. I believe a man ought to live by those precepts, which, if followed, will enable a man to do right. I don't know whether I have or not, but I have tried.

I believe that the fundamental basis for a happy life with family and friends is to treat others as you would like to be treated, speak truthfully, act honorably and keep commitments to the letter.

In public life I have always believed that right will prevail. It has been my policy to obtain the facts -- all the facts possible -- then to make the decision in the public interest and to carry it out. If the facts justify the decision at the time it is made, it will always be right. A public man should not worry constantly about the verdict of history or what future generations will say about him. He must live in the present; make his decisions for the right on the facts as he sees them and history will take care of itself.

I believe a public man must know the history and background of his state and his nation to enable him to come more nearly to a proper decision in the public interest. In my opinion, a man in public life must think always of the public welfare. He must be careful not to mix his private and personal interests with his public actions.

The ethics of a public man must be unimpeachable. He must learn to reject unwise or imprudent requests from friends and associates without losing their friendship or loyalty. I believe that our Bill of Rights must be implemented in fact; that it is the duty of every government -- state, local or federal -- to preserve the rights of the individual.

I believe that a civil rights program, as we must practice it today, involves not so much the protection of the people against the government, but the protection of the people by the government. And for this reason we must make the federal government a friendly, vigilant defender of the rights and equalities of all Americans; and that every man should be free to live his life as he wishes. He should be limited only by his responsibility to his fellow man.

I believe that we should remove the last barriers which stand between millions of our people and their birthright. There can be no justifiable reason for discrimination because of ancestry, or religion, or race, or color.

I believe that to inspire the people of the world whose freedom is in jeopardy, and to restore hope to those who have already lost their civil liberties, we must correct the remaining imperfections in our own democracy.

We know the way -- we only need the will.