Accessibility links
Artificial Disc Offers New Hope for Treating Back Pain Until recently, the only surgical solution to a common lower-back pain condition known as Degenerative Disc Disease was a procedure called spinal fusion. But Dallas surgeons are pioneering in the U.S. a procedure that replaces a patient's damaged disc entirely with an artificial insert. 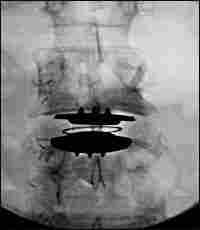 To implant Charite, a surgeon approaches the spine through a patient's abdomen, gently moving the organs and blood vessels aside, and carefully cutting down through the body cavity to reach the back. Once the damaged disc is removed, the two adjacent vertebrae are spread apart and the artificial disc is implanted to take its place. The procedure generally takes one to two hours and is often performed by two surgeons.

About the Charite Implant

The Charite artificial spinal disc is made of two implant-grade metallic endplates and a moveable plastic center made out of polyethylene — the patient's new "disc." The two metal pieces each have six spikes that are pushed into and attached to spinal vertebrae. Once implanted, the device is designed to help align the spine and preserve its range of movement. 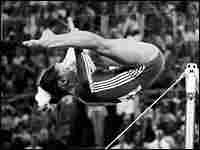 Several other artificial spinal discs are in development, though none have yet received FDA approval:

Some 65 million Americans suffer from low-back pain every year. Twelve million have a condition called Degenerative Disc Disease, which occurs when a disc in the lower back begins to lose the fluid inside it. The disc collapses and the spine loses its natural function and motion.

Until recently, the only surgical solution to Degenerative Disc Disease was a procedure called spinal fusion. Fusion can significantly reduce a patient's range of motion; sometimes, it can accelerate the deterioration of the discs above and below where the fusion took place -- leading to more fusion and an increasingly stiff patient.

But now, surgeons at the Texas Back Institute near Dallas are pioneering in the United States a procedure that relies on an artificial disc called Charite that replaces the patient's damaged disc entirely.

The artificial disc, which has been used in Europe since 1987, recently received approval from the U.S. Food and Drug Administration. Inserting the disc involves a technically demanding operation that requires an approach through the patient's abdomen.

The Charite implant procedure is considered routine in Europe. In the United States, Dr. Stephen Hochschuler and Dr. Scott Blumenthal, the principal investigator of the FDA study, have championed the operation. Blumenthal has performed more Charite operations than anyone in the country. He discussed the surgery with Wade Goodwyn:

Q: Tell us about the FDA study that ended with Charite's approval.

The FDA study involved 276 patients that got the Charite device and 99 patients that were what was called control patients — they had a fusion. After that, we were allowed to do a limited number of patients called "continued access," which allows only the surgeons that were in the study — which was only 14 sites across the United States — to continue to perform the procedure while the FDA continues the evaluation process. I think at the time of FDA approval, there were somewhere around 600 patients done around the U.S.

The purpose of the study — and we had to design the study scientifically — was to show that the Charite device was at least as good as the FDA-approved surgery for the same problem — the problem being chronic disabling low-back pain secondary to Degenerative Disc Disease. We proved that mathematically beyond the shadow of a doubt, and if we look at certain facets of the study, we actually exceeded that standard.

Q: Some surgeons believe that spinal fusion can lead to faster degeneration of the discs above and below the fusion. Why is that?

The lumbar spine is meant to move. There are five segments in the spine. If you take one or two of those away, the motion has to be made up for by the remaining segments, and if they are having to move more than they were intended to move, they are going to be subject to increased stress compared to a normal spine. Basically, what a fusion does is it destroys normal anatomy. We look at a fusion for back pain as a salvage operation, whereas an artificial disc procedure would be construed as a reconstructive operation.

Q: Compare the outcomes of patients who receive the Charite implant and those who get spinal fusion.

In this particular study, whereby we evaluated the fusions and the artificial discs by the same criteria, we looked at pain reduction, we looked at functional improvement, we looked at range of motion, and… very importantly, at patient satisfaction and, if they had the choice, would they do that same procedure again. That's where I can make that statement that the Charite outperformed.

If you look at the overall success rate of the study... well, what we proved is that the Charite is a viable alternative to a spinal fusion. And if you look at the comparison, even if they're equal, both operations have a good potential to reduce pain. One eliminates motion, and one preserves motion.

Q: What does a good outcome with Charite look like? What's the typical experience for a patient?

What we're seeing is, in a good patient, within about two weeks after surgery, they feel a noticeable difference — some the day after surgery feel a noticeable difference. Compared to a fusion patient that may take six months to a year to get to as good as they're going to be, the Charite patients seem to get there within about six weeks to three months.

Q: What kind of poor outcomes have you seen for the Charite surgery? I've seen numbers citing a 10 percent poor outcome rate.

There's been some studies done to say that, really, the most important hallmark of success in pain-reduction surgery is patient satisfaction — there's been European studies that indicate that. The success rate in terms of patient satisfaction has been around that 90 percent figure. That's the positive spin. The negative spin would be what the failure rate is, and we have not had any devices fail.

And if you're looking at it from a poor outcome, where the patient says, "Man, I wish I had never considered having this operation. My pain is absolutely no better," that's where that 10 percent number came from.

Q: At the core of a Charite implant is a piece of polyethylene plastic. How long can the implant be expected to last?

The plastic… is a material that's been used in hip and knee joints for decades, and it's been tested to the FDA's satisfaction to last for up to 80 years. There have been reports of failures here and there, and that's compared to probably 8,000 to 9,000 operations done in the world. You'll see that with hips and knees as well. Any artificial material in the body is subject to failure. It comes down to what the failure rate is. And if it's low, that's good; if it's high, it's bad.

Q: What is life like after a Charite implant? Are there restrictions?

If you're prone to weakness in your bones like osteoporosis, I think you're going to have to be more careful. If you are a young, healthy guy or gal in their 30s or 40s that is exercising regularly, most of those patients don't have any restrictions, and they do occasionally fall if they go skating with their kids or if they go horseback riding… Certainly, if you have a major trauma to your spine, you can cause a fracture, you could cause a displacement of the device. But again, it would have to be fairly major trauma.

Q: Who is a good candidate for the procedure?

A good candidate is someone with chronic (meaning six months or more), severe, disabling lower-back pain from lumbar Degenerative Disc Disease. That gets you in the front door.

The evaluation process gets a little bit more intense from there. There are a lot of imaging studies, there's a lot more that goes into it… Sometimes, it's difficult to tell if a degenerative disc is causing back pain, so we utilize X-rays, we utilize MRI scans, we utilize a test call a discogram — all of those things have to go into it. And frankly, you need a patient that has the right mindset of someone that can get better.