Accessibility links
'Hang-and-Run' Artist Strikes NYC Museums A British artist named Banksy has been able to sneak his work into some of New York's top museums over the past month. He tells Michele Norris what he does and why. 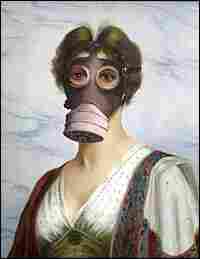 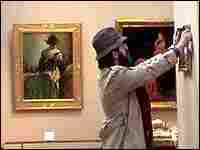 Wearing a disguise, the artist known as Banksy secretly hangs one of his works at New York's Metropolitan Museum of Art. Courtesy Wooster Collective hide caption

In a reverse-theft of sorts, a British artist has been sneaking his works into some of New York's top museums.

The artist, who goes by the name Banksy, has surreptitiously hung works in the Metropolitan Museum of Art, the Museum of Modern Art, the American Museum of Natural History and the Brooklyn Museum.

A self-described "career graffiti writer" and "painter-decorator," Bansky tells Michele Norris that he consulted biographies of Harry Houdini to get ideas about how to sneak into the museums with his artworks, some of which are not small at all.

Asked why he carried out the pranks, Bansky says, simply: "I thought some of [the paintings] were quite good. That's why I thought, you know, put them in a gallery. Otherwise, they would just sit at home and no one would see them."

Banksy on the Web
Wooster Collective