Accessibility links
Amy Rosenthal's Lively, Personal 'Encyclopedia' She is neither a misunderstood genius nor a child celebrity. She has not witnessed the extraordinary. Yet Amy Krouse Rosenthal wants you to know about her life. Her new memoir is an encyclopedia of herself, in alphabetical order. Mallory Kasdan profiles the writer. 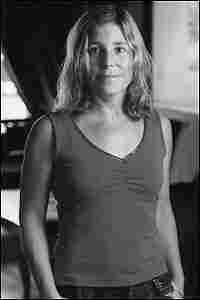 Amy Krouse Rosenthal's Encyclopedia of an Ordinary Life is delivered in bite-size chunks, in alphabetical order.

And it's all those little things... in among some big things... that attract Rosenthal's attention, lending themselves to her deft and wry observations.

It is so much easier to not do something than to do something. Even the smallest task, like filling out a Scholastic Books order form or putting away the butter, requires time, focus, and follow-through. It's astounding, actually, that anything gets done at all, by anyone.

But then, let's say you finally are prepared and determined to do that thing, whatever it is, but you wake up to find that your basement has flooded and you must spend your day making phone calls to the contractor, plumber, and carpet people. Or not that but something else -- perhaps you must stand before a committee for approval, a committee that neither grasps your intent nor appreciates your ingenuity, and anyway, they are in a bit of a hurry to break for lunch.

Yet. Still. Somehow. I am encouraged to see that despite the colossal effort, despite the odds against one, despite the mere constraints of time and schedules and sore throats, houses do get built, pottery gets glazed, e-mails get sent, trees get planted, shoes get reheeled, manifestos get Xeroxed, films get shot, highways get repaved, cakes get frosted, stories get told.

There are so many ways to die at any given moment. Just look, look at all those ambulances in your rearview mirror. There are crashes and wrecks and collisions galore: cars, planes, Amtraks, ferries. You could have a heart attack; it’s not unlikely. A terminal illness you didn’t even know you had could, minutes from now, live up to its defining adjective. Now turn your attention to all the freak accidents lurking in the wings. A massive store display tips over (happened). A soccer goal post unroots itself and crushes a skull (happened). Shelving holding five thousand pounds of sheet metal or lumber at Home Depot collapses (imagined). A top bunk falls onto the bottom bunk (imagined). A strong wind unhinges scaffolding and blows it directly onto a sports car; inside are—were—two twenty-year-olds out shopping (happened). Aneurisms that burst midsentence, ending the life of an advertising executive, a promising playwright, a children's book author (happened, happened, and happened). I think almost weekly about an article I read years and years ago in Reader's Digest: A mother and daughter were driving along when an overhead highway sign fell, instantly killing the girl and removing her face. The timing of that -- the position of the car, how fast they were driving, where and when the sign landed -- as horrifyingly impeccable. And this: A young couple killed in a car accident on the way to her father's funeral. Have you ever? And I'm not even touching on the human-calculated varieties: shooting, stabbing, strangulation by (a) someone you know, (b) someone you don’t know, (c) someone disgruntled (postal worker, unappreciated employee, failing student). And we can't forget malpractice. My sister-in-law died at the age of thirty-two during childbirth because the doctors and nurses missed the red-flagged allergic to anesthesia warning on her medical chart. People don't die anymore in childbirth, everyone knows that, but yet they do; sweet, stunning, silk-scarf-wearing, multilingual Hilary did. People are just dying everywhere, all the time, every which way. What can the rest of us do but hold on for dear life.

Jason and I were fixed up on a blind date, by my dad’s best friend, John. When I opened my front door and saw him, I knew there was something between us. By the end of our merlot and rigatoni, I knew he was the one. Fifty-two weeks later, he knew. I like how when his sister Michel phones him he just answers yep or uh-huh and then she either talks and he occasionally goes alrighty then or, more characteristically, says nothing at all. I like how they always call each other during exciting TV events like the Grammys or The Sopranos' season finale or some Freeview Prince concert on satellite and just sit on the phone together in total silence, sharing the show from their respective city posts. I like that he's had the same best friend since he was three. (Hey, Dave.) I like that he's a good dancer and a surprisingly good jacks player. I like how he barely ever annoys me. I like how we dine at restaurants -- either on stools at the bar instead of waiting an hour and a half for a table, or if we do sit at a table, we'll sit next to each other instead of across. I like how he looks when he's making a toast -- thoughtful, composed, handsome, you know, like a real gentleman. I like how he laughs when he really laughs hard, like during the Will Ferrell streaking scene in Old School. I like how he's forgiving when I shut down and retreat inward. I like how he doesn't give me a hard time about my heap of clothes in the closet, though we both know I have less tolerance for his harmless, scattered piles. I like how he doesn't make me feel bad about my lack of enthusiasm for important adult things like politics and Quicken. I like that I don't mind how he smells when he sweats. I like that when we fight, he tends to have a point, and he makes it skillfully and convincingly. I like how he holds a skillet. I like his hands, they fit good with mine.

I saw this old couple -- attractive, well-groomed, but old, in their eighties -- sitting down at Starbucks the other afternoon. I couldn't help but stare at them; I was intrigued by their oldness, their presence, as old people, at Starbucks. I suddenly felt like it would be okay to go up to them and converse about their oldness. I would ask them if they look at each other and say, can you believe how old we are? we were once young, and now we are old. I imagined them naked. I was curious if coffee tasted any different once you got old, or if it was pretty much the same pleasure it had always been. There was a muffin on their table, and he was reading the paper; he was dressed up, wearing a jacket and tie, as old(er) gentlemen often do. I imagined Jason old, and wondered if, even though he is not this way now, he would wear a jacket and tie once he got really old, and I hoped not because I don’t think I would find that attractive. I hoped he would still wear his brown corduroy shirt with the buttondown snaps, and his cute form-fitting sweaters, particularly the one with the stripes that I like.

Children get to say ta-da!, and I guess magicians, but other than that, it's an underutilized expression. I'm trying to think—an adult might say it as she waltzes in with the turkey, or a homemade cake. But a self-congratulatory ta-da! would certainly be warranted for any number of daily accomplishments. I cleaned out the trunk of my car. Ta-da! I finished filling out the insurance application. Ta-da! I made the bed. Ta-da!

Reprinted by permission from the Web site, encyclopediaofanordinarylife.com

Rosenthal's Site for the Book