Accessibility links
'The Incredibles' The latest blockbuster animated film from the Pixar hothouse was a huge hit in theaters. But NPR's Art Silverman, not a huge fan of animated films in general, sums up the plot in one sentence and says only the behind-the-scenes vignettes on the DVD set's bonus disk makes the home version worthwhile. 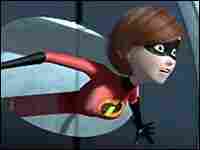 Life is too short to watch the output of someone's computer, projected on a screen in a darkened theater for couple of hours. With that in mind, I've managed to stay away from all the recently praised, highly successful Toy Story films, Shrek iterations and the like. 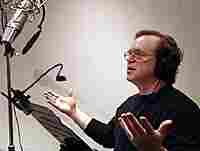 That said, I found the DVD treatment for The Incredibles more than marginally viewable -- especially with the judicious use of the pause control. Moments of wit and imagination removed barriers I'd purposefully erected to protect myself from cartoon drivel.

Synopsis-wise, one sentence will do: Superheroes glumly try to escape forced retirement. But that's all on the first disk of this two-disk set. On the DVD set's second disk -- featuring behind-the-scenes vignettes on the making of the film -- the story changes into one about people working together to make a dream a reality.

Voice actor Sarah Vowell bravely charts her excursion into the maw of Pixar, the animation hit factory behind the Toy Story series and Finding Nemo. Plucked from the Schwab's Drugstore of public radio (she's a star from This American Life, produced by Public Radio International), Vowell manages -- without embarrassment -- to proclaim how cool it was to have been part of The Incredibles. 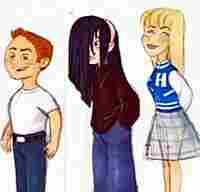 And much to its credit, Pixar allows her to get in a few uncensored jabs, such as: "Radio uses the imagination, unlike this film crap."

The behind-the-scenes features portray the deeply felt sense of dedication to the project and the animation house among Pixar's talented technical people. All departments are given their due -- notably the sound unit, which includes Randy Thom, who won an Academy Award for his sound editing on this film.

Also included in the "bonus disk" are "retro-cartoons" in which The Incredibles characters are featured in the lazy animation style of that awful Clutch Cargo afternoon TV show for kids -- the lips move, the camera scans, but things don't really "move." As parody, it's perfection, a reminder of the dreck that often comes from children's television.

What follows doesn't work as well: a commentary version of the same, with the "real" Mr. Incredible and a sidekick "watching" the knock-off for the first time and getting enraged about it. It's not subtle, and whatever credit the creators could have won for trying this stunt is lost in the execution.

The so-called "deleted scenes" may disappoint even the most ardent Incredibles fan -- they only show minimally drawn storyboards in black and white, so I'm not sure who the intended audience is for this minutiae.

Then there are the outtakes. These aren't tongue-in-cheek blooper moments that accompany some animated films. Here they appear to be actual mistakes made in early stages of the production -- and they are funny. You might think an animator hit the wrong key on the computer. These must have been hilarious to the animators at the time, but with the addition of a laugh track and quick cutting from one goof to another, something funny -- no, everything -- is lost.