Accessibility links
Heirloom Produce, Saving an Heirloom Farm After six generations, the Jones family was in danger of losing their Ohio farm. But the growing appetite for specialty produce has helped turn their fortunes around. Now they sell to renowned chefs. 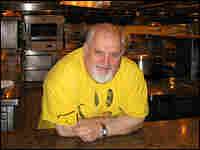 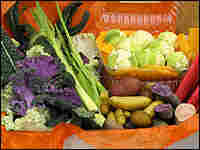 The growing trend of restaurants using specialty produce has helped some family farms turn their fortunes around. After nearly losing their farm 22 years ago, Bob Jones and his sons have bounced back by growing heirloom vegetables and herbs for some of the nation's most renowned chefs.

The Joneses have farmed their land in Huron, Ohio -- near Lake Erie -- for six generations. In 1983, they lost nearly an entire 1,200-acre crop of peppers, cabbage and sweet corn in a hailstorm. Bankrupt, Bob Jones Sr. and his family started over on six acres.

But problems had already begun to hit the family's business. Jones's son, Bobby, says, "We were beginning to see that the way we were farming wasn't working." Jones says that growing more specialized -- and expensive -- varieties came about because "we were fortunate enough to start to develop these relationships with quality-minded chefs, and it all kind of melded together."

Now the Joneses' Chef's Garden company markets almost exclusively to restaurant chefs. The farm has grown into a business that employs 90 people; last year, sales increased by around 20 percent. They don't use chemicals, and some of their equipment dates back a generation.

The Chef's Garden grows 600 varieties of herbs and vegetables, from tiny cauliflower to 87 types of tomatoes. Some of that winds up at Citronelle, a four-star restaurant in Washington, D.C., where dinner for four can easily top $500. Chef Michel Richard explains the allure of Chef's Garden's artisan produce. "My job is to create some surprising food -- food you don't eat all the time."

That fits with the Joneses' plans. They recently opened a training facility for chefs, the Culinary Vegetable Institute. There, visitors can try out new produce and dishes in a state-of-the-art kitchen.