Accessibility links
Q&A: A Look at Hoaxes Through the Ages Michael Farquhar, author of a new book on the history of deceptions and fraud, shares his favorite April Fool's Day prank and talks about great hoaxes of the past.

Q&A: A Look at Hoaxes Through the Ages

Q&A: A Look at Hoaxes Through the Ages 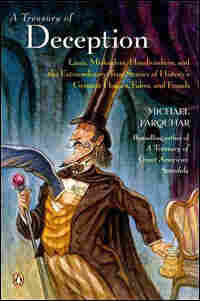 Michael Farquhar is a writer and editor at The Washington Post and author of the forthcoming book A Treasury of Deception: Liars, Misleaders, Hoodwinkers, and the Extraordinary True Stories of History's Greatest Hoaxes, Fakes and Frauds.

Can you tell us about some of the best April Fool's day pranks?

One of my favorite April Fool's pranks was pulled in 1957 by a most unlikely culprit: the British Broadcasting System. Richard Dimbleby, a well-respected journalist, took viewers of the news program Panorama on a tour of the annual spaghetti harvest in the Swiss town of Ticino. The bogus report featured images of a family cheerfully plucking strips of pasta as Dimbleby earnestly narrated the details of the harvest, including how the danger of a late frost always worried the pasta farmers. When the program concluded, the BBC was flooded with calls from people wondering where they might get a spaghetti tree of their own.

What are some of the most successful hoaxes you've come across?

One of the most successful hoaxes in history was really no joke. In fact, it may very well have saved civilization. During World War II, the Allies were planning to storm Normandy, but they wanted Hitler to believe the strike would be at the Pas-de-Calais. That way he would amass his strongest forces there and leave Normandy less defended.

To create the illusion of a massive invasion force, the Allies turned southeastern England into something like an enormous film set. There were inflatable planes and tanks, as well as fabricated troop encampments, dumps, field kitchens, and fuel lines. Artificial radio traffic was sent into the ether, while planted newspaper reports described life around the ever-expanding military base. General George S. Patton was even assigned to lead this phantom force.

It was a brilliant deception. And though the fighting was fierce at Normandy, with so many lives lost, Hitler had been thoroughly hoodwinked. He kept his strongest forces at Calais, and left the Allies the opening they needed to eventually crush him.

Who's your favorite historical prankster?

My favorite all-time prankster was a retired carpenter known only as Lozier, who in 1824 convinced people in Manhattan that the lower end of their island was about to snap off and sink due to over building there. Unbelievable as it may sound, Lozier actually persuaded the city's honchos that Manhattan had to be sawed in half at the lower end, dragged out past Ellis Island, turned around, and reattached at the heavy end.

Hundreds of laborers were commissioned for the task, with thousands of animals imported to the construction site to feed them. Huge saws were made, along with a giant anchor to prevent the detached piece of Manhattan from floating out to sea.

Large, festive crowds turned out on the day that sawing was set to commence, with musicians and a parade added for entertainment. Several hours passed, however, and there was no sign of Lozier. Left to ponder their foolishness, irate New Yorkers began to realize they had been duped and formed a posse to hunt down the deceitful carpenter. But he was long gone, apparently having gained nothing from his hoax except a marvelous sense of accomplishment.

Is there a pattern to scams that have worked well throughout history?

Audacity seems to be the common element in the most successful hoaxes. Just look at Lozier. A great hoaxer needs to be bold and unblinking. How else would a Polish peasant convince the world she was Anastasia, for example, or a fraud like Nostradamus make people believe he could actually predict the future?

What's the longest-running hoax that you've come across?

One of the longest-running hoaxes is actually a deadly lie. It's a crude forgery known as The Protocols of the Elders of Zion, which is purported to be the master plan of a Jewish conspiracy to take over the world. The fraud was concocted at the turn of the last century, reportedly under the auspices of the tsarist secret police, and has since metastasized throughout the globe. Hitler was a big believer in the Protocols, and used them as a justification for the Holocaust. Auto pioneer Henry Ford was another. He spread the word about the Protocols in a book called The International Jew: The World's Foremost Problem, which became an international bestseller and was at one point second only to the Bible in sales. Today the Protocols are everywhere -- from neo-Nazi websites to extremist newspapers in the Middle East -- and believed by millions.

What motivates the average prankster?

When you're talking about the pure prankster (as opposed to deceptions done for profit or power), I'd say his motivation is to fool people just for the pure fun of it -- to stand slightly above his fellow man, and watch him wiggle under the thumb of outrageous fortune.

Why are some hoaxes so hard to refute?

I don't think it's that difficult to refute a hoax, but it often takes some time. Piltdown Man is an example. The so-called evidence of the missing link between man and ape was discovered in England in 1913, and caused a huge sensation. Because the "discovery" was made in the early days of human paleontology, few questioned the authenticity of Piltdown Man. It was only decades later that he was determined to be a clumsy concoction made from the skull of a medieval Englishman and the jawbone of an ape.

Similarly, a company calling itself Clonaid announced several years ago that it had cloned a human and was planning more. The media pounced on the story, while President Bush and the Vatican condemned the group. Now, while the story may seem absurd -- especially considering that the founder of Clonaid advocates the belief that humans were created by alien scientists -- it's nevertheless difficult to disprove. After all, cloning is no longer science fiction.

Why is it so easy to fool the media and the public?

Because humans can be almost unfathomably gullible. Look how many people place their faith in televangelists, or spend good money on the most spurious products advertised on late night TV. As for the media, it will jump on almost anything that makes good copy, which makes it vulnerable to fraud. A trickster named Alan Abel, for example, created a bogus decency league ostensibly devoted to placing clothing on animals so their genitalia were not exposed. The press went nuts.

Have we gotten any better through the centuries at identifying hoaxes and pranks?

No. We're as eager as ever to believe any load of bunk. And the information age has only widened the opportunity for hucksters to feed it to us. 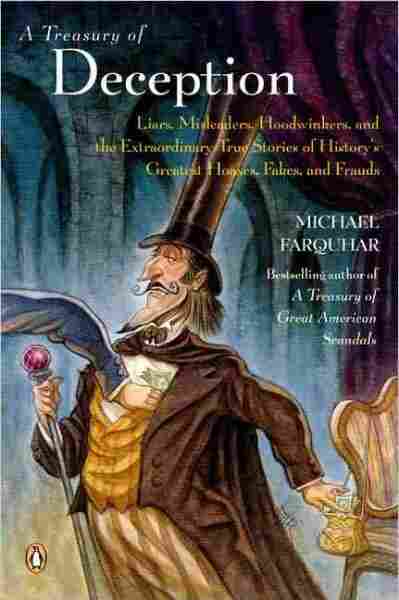 A Treasury Of Deception