Accessibility links
Flexible Theater Design and Audience Intimacy Not long ago, nearly all U.S. theaters looked the same -- framed stages tucked behind curtains. But the WaterTower Theatre has a flexible design that brings actors and audiences closer together. 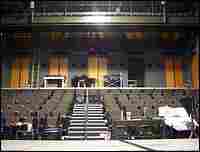 The theater features dozens of double-doors and hundreds of small square holes in the concrete walls that allow its appearance to change to match the production. James Lemons hide caption

A few decades ago, virtually all U.S. theaters looked the same, with framed stages tucked behind curtains. In the Dallas suburb of Addison, Texas, the WaterTower Theatre features a flexible design that brings actors and their audiences closer together, enhancing the intimacy of the theater experience.

The Dallas-area WaterTower Theatre is dwarfed by the structure that gives it its name. James Lemons hide caption

Dallas has a history of reinventing theatrical space. In 1947, theater visionary Margo Jones got rid of the frame, the curtain and the sets and introduced audiences to a vastly different theatrical experience. She laid out her vision in a 1951 book, Theater-in-the-Round.

Before then, audiences were separated by distance from the actors. "With resident theaters, the idea is to get rid of that distance, to put us all in the same room," Bob Mondello reports.

At the WaterTower Theatre, just about everything except the walls can be dismantled, something that happens three times a year. The shifts shake the audience up a little, and keep them involved, says the troupe's communications coordinator, James Lemons.

"If you think of it like an eggshell, we completely remove all the egg whites and yolk and replace it with something different," Lemons says.

Set designer Clare DeVries once put a creek with live fish midstage. The audience had to cross footbridges to get to the seats. In an upcoming production, Enchanted April, the space will shift to a tennis-court layout, with seats on either side of the stage.

The play will be set in London and Italy, and it too will feature water: "It's actually going to rain on stage," DeVries says. "We're going to get the actors wet. It's going to be the foggy, wet, cold, where's-my-coat sort of London…"