Listen
'Sin City': Guiding a Comic to the Silver Screen 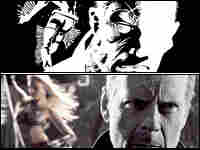 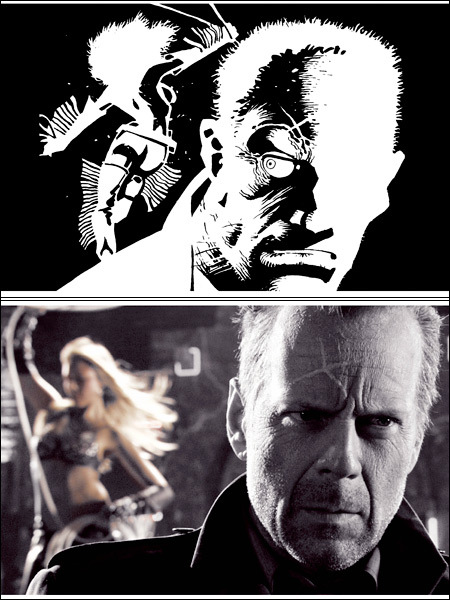 Seeing the difference: a panel from Frank Miller's graphic novel Sin City, top; Jessica Alba as Nancy and Bruce Willis as Hartigan, below. 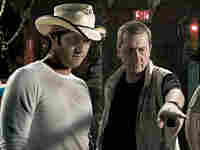 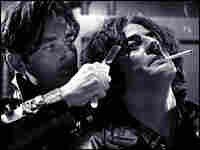 The dark and violent comic Sin City is now a movie. Director Robert Rodriguez says that even on the page, artist Frank Miller's stories had a cinematic quality. To learn more, NPR asked director Kevin Smith to speak with Rodriguez and Miller.

Sin City relates life in a hard-boiled town full of self-interested citizens and tough-talking cops. In the film as in the graphic novels, everyone has an angle, from crooks to femme fatales. The movie also shares the stark, yet evocative, mostly black and white palette of its print counterpart.

Rodriguez and Miller collaborated closely on the film adaptation, sharing director and producer credits. In addition, Rodriguez served as the movie's cinematographer and editor, while Miller wrote the screenplay.

Frank Miller has been linked to several large-scale film franchises, from Robocop and Batman to Daredevil. He has had roles in several movies he helped create; in Sin City, he appears as a priest.

Among interviewer Kevin Smith's current projects is a film adaptation of the cult TV series The Green Hornet, for which he wrote the screenplay. His first feature, Clerks (1994), became a phenomenon and launched both his directorial career and that of his alter ego, Silent Bob. His Jersey Girl, starring Ben Affleck and Liv Tyler, came out last year.