Accessibility links
U.S. Team Readies for World Baking Championship Every three years, the world's top bakers round up their best recipes and their rolling pins and head to Paris for an Olympic-style competition. U.S. team members offer insights on their preparation. 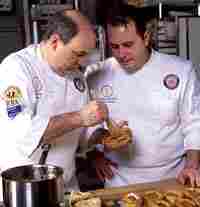 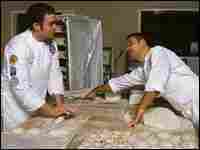 Every three years, the world's top bakers round up their best recipes and their rolling pins and head to Paris for an Olympic-style competition known as the Coupe du Monde de la Boulangerie (the World Cup of Baking).

Following is one of the recipes used by the 2002 U.S. team, which took the silver at the 2002 Coupe du Monde. The recipe was developed for home use from formulas developed for the competition.

The 2005 team has developed its own formulas for the April 17-19 competition in Paris, but they remain a secret until after the Coupe du Monde.

American Harvest pays tribute to the role of Native Americans in our nation's history by incorporating many of their indigenous ingredients in this tasty, robust bread. Hints of grassy wild rice, tangy cranberries and all-American cornmeal combine to create a truly American bread.

The night before making the bread, combine the cracked rye, cracked wheat, and the polenta with 1/4 cup of water, cover and let sit overnight at room temperature. Cover the cranberries with 1/2 of the orange juice and let sit, covered, overnight.

On the day of baking, dissolve the yeast in the water in the bowl of an electric mixer.

Add the remaining ingredients except for the rice, cranberries, and the soaked grains. Using the dough hook, mix in low speed for 3 minutes or until everything is well combined. If the dough is very stiff add extra water.

Turn the dough out onto a floured table. Divide the dough in two pieces. Shape them loosely into balls and let rest on the table, covered with a damp towel or plastic wrap, for 30 minutes.

Shape the dough into a football shape and place on a sheet pan that has been dusted with cornmeal. Preheat the oven to 450 degrees. Cover the loaves with plastic or a damp towel and let rise for 1 hour 45 minutes.

Make a cut on the top of the bread from point to point, and bake for 30-35 minutes or until the bread is nicely browned and there is a hollow sound when the loaf is tapped on the bottom.