Accessibility links
Shaking Faith in Social Security By posing next to a federal filing cabinet in West Virginia, President Bush tries a new tack in his bid to change Social Security -- attacking the financial underpinnings of the system, David Green says in the latest Pennsylvania Avenue column. 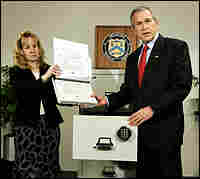 President Bush poses next to a filing cabinet at the Bureau of Public Debt in Parkersburg, W.Va. At left is Susan Chapman, director of the Division of Federal Investments. Reuters hide caption

Remember your high school chemistry teacher, spending hours setting up an experiment on the lab table, hoping the liquid would bubble when it was supposed to and teach you an important concept in your scientific education?

President Bush looked a little like that chemistry teacher this week in Parkersburg, W.Va., where he was trying to teach the American public a lesson about Social Security. He wanted to demonstrate that the $1.7 trillion Social Security trust fund is not a pile of cash waiting for people when they retire. It is, rather, an obligation the federal government keeps on the books and promises to pay to retirees.

Mr. Bush was eager to pull off his demonstration. He posed for photos next to a filing cabinet at the Bureau of Public Debt. He peeked into a drawer. He examined a copy of a bond. And sure enough, he concluded, it was not real money -- not the kind anyone could spend.

It's not clear how successful Mr. Bush's experiment was in Parkersburg. The White House press corps, as always, trailed the president. But if images of the president and the filing cabinet made it onto television or into newspapers, they were hard to find.

Still, the visit says a lot about where we are in the Social Security debate. It showed a White House fighting to find the right message on Social Security, battling amid ample evidence it hasn't nailed it down yet.

Polls have shown support for the president's overhaul was never exactly robust, and lately it's been fading. Meanwhile, a growing chorus of Republicans say they can't sell the public on Mr. Bush's ideas -- or that the White House is doing a bad job of marketing.

Some supporters of the private personal accounts say the administration has erred by being too positive about the Social Security system itself. Libertarians have long maintained that the program was a government fraud from the outset, a Ponzi scheme that strains later participants to pay exorbitant benefits to the earlier participants. The president has generally avoided such fundamental critiques of Social Security, choosing instead to praise the program and pledge to preserve it.

But in Parkersburg, for the first time, Mr. Bush focused primarily on the nature of the trust fund -- and on convincing Americans it does not contain the cash some may think it does. At least for a day -- and chances are he's not done with this theme -- Mr. Bush was aligning himself with those who think a frontal assault on Social Security's assumptions is the best way to drum up support for changing it.

By blowing up the myth that there's actual money stored away for future retirees, you accomplish two things, they argue. First, you create fear and a sense of betrayal and crisis. Second, you bolster the case for personal private investment accounts by saying they represent a stash of an individual's own cash -- with no reliance on the government.

Democrats pounced on the president for taking this direction, portraying him as irresponsible for doubting the reliability of government bonds, or questioning the famous "full faith and credit" of the United States.

But in all this political wrangling over the trust fund and its harboring agency, the Bureau of Public Debt, there is surely an irony. Because the bureau itself was originally set up to answer a previous generation of charges about Social Security.

In 1994, Indiana Rep. Andrew Jacobs Jr. and fellow Democrats in the House added language to a Social Security bill about to be signed by President Clinton that required the Treasury to maintain a "physical document in form of bond, note or certificate of indebtedness, rather than accounting entry" to represent the Social Security trust.

Jacobs, now retired, told the Associated Press recently that he pushed this provision explicitly to counter "disingenuous assertions" from those who said no Social Security trust exists. Better to have a document than just another line on the books (or in cyberspace).

Created for symbolic purposes by Democrats a decade ago to bolster faith in the fund, the bonds and their cabinet have become props for Mr. Bush to try to accomplish the opposite.