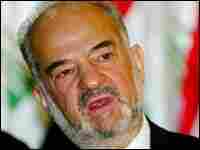 Ibrahim al-Jaafari talks to reporters after a meeting of the National Assembly in Baghdad, April 6, 2005. Reuters Reuters hide caption