Accessibility links
Salk Polio Vaccine Conquered Terrifying Disease On April 12, 1955, the world heard one of the most eagerly anticipated announcements in medical history: Dr. Jonas Salk's polio vaccine worked. The vaccine turned a disease that once horrified America into a memory. 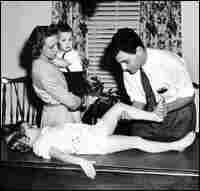 A young child is examined for polio in the 1950s. CDC hide caption 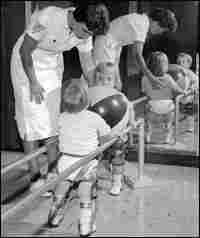 A physical therapist works with two polio-stricken children in the 1950s. In the early '50s, the U.S. had some 20,000 polio cases a year. Following the introduction of the vaccine in 1955, that figure dropped, falling to about 3,000 per year by 1960. Charles Farmer/CDC hide caption 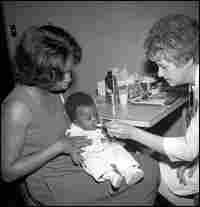 Dr. Albert Sabin developed the oral polio vaccine in 1961. Above, an infant receives the oral vaccine in Georgia in the 1970s. Meridith Hickson/CDC hide caption 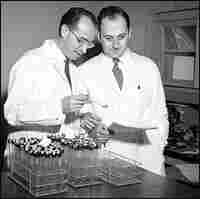 Dr. Jonas Salk, left, and Dr. Julius Youngner shown working in a research lab during the development of the first polio vaccine, which was injectable.

Now 84 and a professor emeritus at the University of Pittsburgh, Youngner says Salk offended some of his colleagues by refusing to credit their contributions to the development of the polio vaccine.

Fifty years ago, on April 12, 1955, the world heard one of the most eagerly anticipated announcements in medical history: Dr. Jonas Salk's polio vaccine worked. The vaccine turned a disease that once horrified America into a memory.

NPR's Joe Palca looks back at the science that created a successful vaccine -- and the people behind the medical milestone.

Timeline: The Fight Against Polio 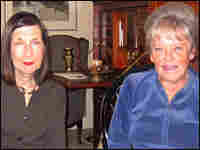 Maxine Fisher, left, and Beatrice Sharp Slutsky were both stricken with polio as children. At age 13, Slutsky received Salk's polio vaccine in the first pilot trials of the vaccine, held in the Pittsburgh area; Fisher declined to participate. Joe Palca, NPR hide caption

1894 The first known polio epidemic in the United States occurs in Vermont.

1932 Franklin D. Roosevelt is elected President of the United States.

1947 The University of Pittsburgh recruits Dr. Jonas Salk to develop a virus research program. Techniques Salk picked up while working with influenza are later used to develop the polio vaccine.

1948-49 Scientists confirm the existence of three strains of poliovirus.

1949 Dr. John Enders, Dr. Frederick Robbins and Dr. Thomas Weller develop a way to grow poliovirus in tissue culture, a breakthrough that aided in the creation of the polio vaccine. Their work earned the three scientists the Nobel Prize in physiology or medicine in 1954.

-- Salk's former mentor, Dr. Thomas Francis, designs, directs and evaluates field trials of the polio vaccine. Unprecedented in their scope and size, the trials involve around 1.8 million children from the United States, Canada and Finland. They are among the first to use the double-blind process that has since become standard.

1955 On April 12, Francis announces the results of the field trials, declaring that Salk's vaccine is "safe, effective and potent."

1979 The last U.S. case of polio caused by wild poliovirus is reported.

1988 Worldwide, polio continues to affect some 350,000 people in 125 countries. In response, the World Health Organization, UNICEF, Rotary International and the U.S. Centers for Disease Control and Prevention launch the Global Polio Eradication Initiative.

1994 The Americas are certified polio-free.

1999 The U.S. Public Health Service recommends that the oral vaccine be discontinued in the United States, and a modified injectable vaccine becomes the preferred vaccine. The oral vaccine -- which is cheaper and easier to administer -- remains the vaccine of choice for eradication efforts elsewhere around the globe.