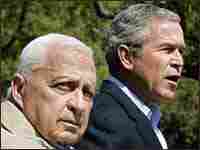 There did not appear to be a resolution on differences over the expansion of Jewish settlements in the West Bank. Both leaders said the Palestinians need to do more to confront and end terrorism.