Accessibility links
DeLay's Precarious Strategy for Survival Tom DeLay is under increasing pressure -- even from some in the GOP -- to resign as House majority leader. In the latest Pennsylvania Avenue column, Andrea Seabrook examines his strategy for dealing with the political crisis. 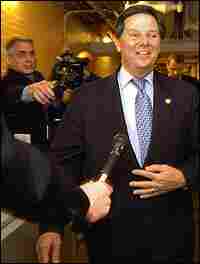 Right now Washington must feel like a pressure cooker to House Majority Leader Tom DeLay. His face appears in every newspaper and news show and his name is heard in every political conversation. His fate has become fodder for oddsmakers.

The Texas Republican faces new charges of ethical misconduct every week, and some lawmakers are questioning his ability to continue driving the majority party in Congress.

Like every other political leader caught in such a crossfire, DeLay must choose a defense strategy. Generally speaking, people decide upon one of two approaches:

• Defuse the tension by offering to cooperate with any legitimate investigation or inquiry. In DeLay's case, he presumably could seek to restore the House Ethics Committee to operating condition.

• Counterattack, insisting that all those in pursuit are actually the bad guys.

Thus far, in public at least, DeLay has chosen the second strategy. He and his allies explain the ever-growing snowball of allegations by pointing to what they call a massive, organized effort by Democrats and liberal groups to take down the majority leader.

In comments last month to the Family Research Council, a conservative Christian organization, DeLay cited "a huge, nationwide, concerted effort" to undermine what he called "the conservative movement" and to "destroy everything that we believe in."

This line had its desired impact at that meeting, and it has helped DeLay energize his troops on a broad front. In that sense, it is proving effective. But it has its problems, too.

This description of Democrats and the left as a cunning, skillful and highly effective juggernaut directly contradicts the picture DeLay and other Republicans regularly paint of their political foes. We are far more accustomed to hearing that the Democrats are a shadow of their former selves, a dwindling remnant of a once potent political party. Down in numbers, they are also supposed to be demoralized, disorganized and ineffective.

This characterization of the minority party is common in the news media as well, and not just the conservative opinion journals. Most recently, the White House, congressional Republicans and many in the media have been pummeling Democrats for their lack of a plan -- or even ideas -- on Social Security, the budget deficit, problems in schools and challenges in foreign policy.

But those same Democrats and supporting liberal organizations suddenly go from weak and negligible to powerful and cohesive when it comes to confronting DeLay, one of the most powerful men in Washington.

This line of defense indicates DeLay has decided he can survive by hardening his base and keeping it active, much as President Bush did in winning re-election. So long as the world divides by party and ideology, DeLay can prevail -- if barely -- because his party is in charge.

But this is a precarious strategy that is utterly dependent on preventing cracks in that base.

That's why it hurt DeLay so badly to be criticized by the reliably conservative Wall Street Journal editorial page last month. The editorial recounted the "rap sheet" on DeLay, and charged that the man who came to power campaigning against the corrupt Washington elite had to descended to smelling "like the Beltway itself."

DeLay is not damaged when a party maverick such as Christopher Shays of Connecticut says he thinks the majority leader should resign. Hardly anyone expects Shays to think otherwise. But it matters when a movement conservative such as Pennsylvania Republican Sen. Rick Santorum even hints at hearing out DeLay's accusers.

Santorum told ABC News that DeLay should "come forward and lay out what he did and why he did it and let the people then judge for themselves." Santorum went on to say it appears as if DeLay has not done anything illegal, but the comments served to create distance between the two powerful spokesmen for social conservatives.

For Tom DeLay, one of the founding fathers of the Republican revolution a decade ago, the irony could not be crueler.