Accessibility links
Oscar-Winner Drexler Brings His Music to America Oscar-winning singer/songwriter Jorge Drexler, who started out as a medical doctor in Uruguay, tells Jennifer Ludden about his rich cultural background, his eclectic muscial mix and the U.S. debut of his latest CD, Eco.

Three from the New CD

Jorge Drexler's "Al Otro Lado del Rio" was the first song in Spanish to be nominated for an Academy Award. It won, making Drexler a hero in his native Uruguay. And the attention he got -- in part because he was not invited to perform the song on Oscar night -- has prompted another first. After releasing six previous albums abroad, his next effort, Eco, makes its debut in the United States. 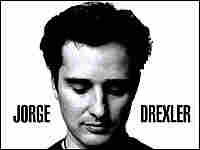 Things are looking up for Jorge Drexler, who has a hit song and a new CD. WEA International hide caption

Drexler wrote "Al Otro Lado del Rio" ("The Other Side of the River") for The Motorcycle Diaries, a film about the life of revolutionary Che Guevara. And like Che, he is a man of more than one country -- he now lives in Spain -- and much change. He began his working career as a medical doctor before turning to music.

He tells Jennifer Ludden about his mixed cultural background and his equally rich blend of pop, electronica and Uruguayan folk music.