Accessibility links
R. Crumb's Musical Moonlighting Robert Crumb, the iconic cartoonist and illustrator, lives in a small French village and does not often speak to the media. In a conversation with Frank Browning, he talks about his love of music from bygone days and his band, the Cheap Suit Serenaders.

Robert Crumb does not like to talk with the media about his work, and lives far from the spotlight in a small town in southern France. Crumb thinks his comics speak for themselves: They are punctuated by raunchy depictions of women, self-portraits that do not shy from being unflattering, and a cast of characters including Fritz the Cat and Mr. Natural.

But one thing Crumb doesn't mind discussing is his love of music. He began collecting records as a kid, and owns thousands of them. He also plays the banjo and has performed with a few bands, including one he had in San Francisco called the Cheap Suit Serenaders ("Cheap Suit Special," left). Now, Crumb plays with the French band Les Primitives du Futur ("Cruelle Tendresse"). He seldom plays in public anymore, but Crumb continues to look for lost sounds and images. 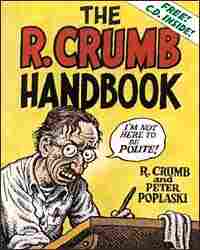 A new collection, The R. Crumb Handbook, also comes with a CD featuring Crumb playing with various bands over the years. Selections appear below. hide caption