Read the text of the speech delivered by Joseph Ratzinger from the balcony of St. Peter's Basilica shortly after his election as pope. He chose the name of Benedict XVI.

"Dear brothers and sisters, after the great Pope John Paul II, the cardinals have elected me — a simple, humble worker in the vineyard of the Lord.

"The fact that the Lord can work and act even with insufficient means consoles me, and above all I entrust myself to your prayers.

"In the joy of the risen Lord, trusting in his permanent help, we go forward. The Lord will help us, and Mary, his very holy mother, stands by us." 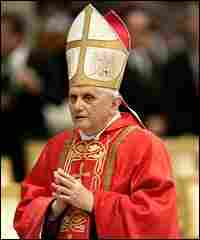 A Biography of Cardinal Ratzinger:

Joseph Ratzinger (Germany, 4/16/1927). Head of the Congregation for the Doctrine of the Faith. Probably the best known cardinal in the world, Ratzinger enjoyed a close personal and philosophical relationship with Pope John Paul II. Ratzinger was the pope's chief theological advisor, and was also the Vatican’s policeman of doctrinal purity, defending orthodoxy and cracking down on theologians who have strayed (mainly to the left ) of Vatican moral teaching.

Ratzinger entered seminary during World War II, but in 1943, he was drafted as an assistant to a Nazi anti-aircraft unit. He deserted the German army in 1945, and shortly after the war, re-entered seminary. Ordained in 1951, Ratzinger was in his early years in the priesthood a progressive; but after the student revolution in 1968, he shifted to the right. John Paul II appointed him to head the Congregation for the Doctrine of the Faith in 1981.

Ratzinger has been described as a "shy and gentle soul," an accomplished pianist with a preference for Mozart, and fluent in several languages. A Ratzinger papacy would extend the conservative legacy of John Paul II.