Accessibility links
Inner-City Teacher Takes No Shortcuts to Success He's won the American Teacher Award, been awarded the National Medal of Arts, and made an honorary Member of the Order of the British Empire. For 24 years, Rafe Esquith has taught at an inner city school in Los Angeles, inspiring his fifth graders to excel far beyond the low expectations often placed on poor, immigrant children. 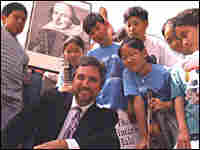 Rafe Esquith, pictured with some of his students on the cover of his book There Are No Shortcuts. hide caption 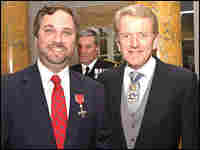 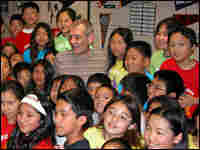 He's won the American Teacher Award, been awarded the National Medal of Arts, and made an honorary Member of the Order of the British Empire.

And yet for 24 years, Rafe Esquith has continued to teach at Hobart Elementary, an inner-city school in Los Angeles, inspiring his fifth graders to excel far beyond the low expectations often placed on poor, immigrant children.

Every morning, Esquith's students arrive at school at 6:30 a.m., nearly two hours before the rest of the students, to work on mental math exercises. It's part of what he calls the "culture of excellence" in his classroom. Esquith expects a lot from his 10-year-olds, and he gets it. They volunteer to come in early, work through recess and stay late until 5 p.m. And they come to class during vacations and holidays.

Their hard work shows up in test scores: They consistently score in the top 5 percent to 10 percent of the country.

The second-largest elementary school in the nation, Hobart has more than 2,000 students; 90 percent live below the poverty level. All are from immigrant families, primarily Hispanic and Asian. Though none speaks English as a first language, Esquith's students read literature far above their fifth-grade level -- Catcher in the Rye, Huckleberry Finn, To Kill a Mockingbird.

But Esquith takes his students beyond contemporary literature and into a world at the heart and soul of his teaching: an intensive immersion in William Shakespeare -- reading his plays, studying his life and times. This yearlong study culminates in April, when students present a full-length, unabridged production of Shakespeare. Last year, it was Hamlet. This year, it's The Taming of the Shrew.

That intensive education has taken the "Hobart Shakespearians" far beyond their classroom; they've appeared at the Old Globe Theatre in London, before the Royal Shakespeare Company, and at Shakespearian festivals throughout the United States. They've also garnered attention from the likes of actor Ian McKellan and Oprah Winfrey, who recently donated $100,000 to the class' activities.

As Esquith explains it, his students aren't geniuses; they just outwork everybody else.

"There is a misconception that poor children do not care about school," Esquith says. "It's just not true. If you build it, they will come.

"We have a culture here with so many wonderful things for the children to do that they hate leaving this classroom."

Book Excerpt: There Are No Shortcuts

In his 2003 memoir There Are No Shortcuts, Esquith recounts his successes and failures in the trenches of an inner-city elementary school. Read an excerpt from the book below:

From Chapter 7: On the Road to Find Out

For several years this book and character became the highlight of my year of reading great novels with the students. It was Mark Twain's masterpiece, The Adventures of Huckleberry Finn....

I, too, would reject society, and a school system damaged beyond repair. If a few cool kids wanted to light out for the territory with me, they were welcome to come aboard the raft on which I sailed.

Except I had come to a point where no one was getting on board the raft with me. I loved Huck, but I was still lost. I thought I knew who I was, but to be Huck was not to be a great teacher.

It took a ten-year-old to challenge and humble me into seeing that Huck was not the answer for me...

I was now ready to find the role model who had the answer for me. I reread Harper Lee's To Kill a Mockingbird, and I realized I had found my hero in Atticus Finch...

It hit me like a thunderbolt. You see, Atticus knows everything Huck knows. He knows society is racist. He recognizes the violence, hypocrisy, injustice, and ignorance of society. He knows he is going to lose.

But Atticus does not light out for the territory. He goes back into the courtroom to fight the fight as best as he can, because it is what he believes in. he doesn't do it because of the law, or the rules, or what people will think. He has his own code, and he lives by it as well as he can.

I still cry when I think about this. My classroom is my courtroom. I am going to lose more than I win. There are many times when, despite my efforts, I will lose children to poverty, ignorance, and, most tragically, a society that embraces mediocrity.

I've made plenty of mistakes since rediscovering Atticus, but I've always been able to hold my head up to my students. Atticus showed me the way.

Excerpted from There Are No Shortcuts, copyright 2003 by Rafe Esquith. 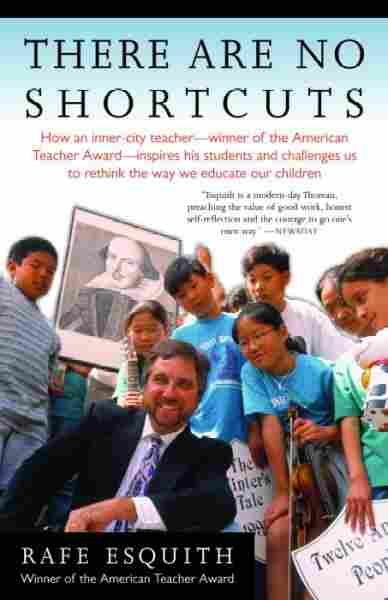 There Are No Shortcuts

Title
There Are No Shortcuts
Author
Rafe Esquith