Accessibility links
Catholic Complicity and Rwanda Genocide Human-rights advocates are demanding an apology from the Catholic Church for its role in the 1994 Rwandan genocide. Now, an international court is trying several Catholic priests.

Human-rights advocates are demanding an apology from the Catholic Church for its alleged role in the 1994 Rwandan genocide, arguing the church did not do enough to stop the killings.

Now, an international court is trying several Catholic priests for their alleged role in the massacres, in which Hutus murdered 800,000 minority Tutsis and moderate Hutus.

The Archbishop of Kigali declined to be interviewed but in a written response to questions by NPR he says the church didn't have the power to stop the killings. He adds flatly that no Rwandan clergy were involved in the genocide. 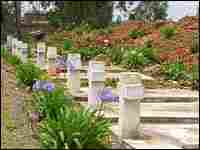 Prosecutors say at least 2,000 people were killed at the Nyange Church in western Rwanda when the parish priest ordered the church to be bulldozed on top of Tutsi refugees. Graves of some of the victims are next to ruins of the church. Jason Beaubien, NPR hide caption