Accessibility links
Springsteen Goes Soul Searching with 'Devils' On his latest album, Devils & Dust, rocker Bruce Springsteen strips down, musically and spiritually, using his lone voice on spare acoustic songs to explore themes of spirituality, of moral uncertainty and loss. In a two-part interview, the singer talks about his life, songwriting and new album.

Listen To Part One Of The Interview

Listen To Part One Of The Interview

Listen To Part Two Of The Interview

Jesus Was an Only Son

On his latest album, Devils & Dust, rocker Bruce Springsteen strips down, musically and spiritually: The singer uses his lone voice against a spare acoustic backdrop to explore themes of spirituality, moral uncertainty and loss. 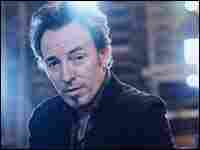 "At this point, a lot of [my music] traces back to gospel roots... I was drawn to music that addressed the spirit, probably because my own needed to be addressed," Springsteen told Renee Montagne during a recent interview in Asbury Park, N.J.

Springsteen broke through with his 1975 album Born to Run, which established him as a writer of characters. "You're always writing about yourself… you hide it in a variety of ways, and you meld your voice with other lives," Springsteen said.

Among the characters on his latest release is a young soldier at a checkpoint in Iraq, whose story is explored in the title track. It begins: "I got my finger on the trigger, but I don't know who to trust ... I feel a dirty wind blowing devils and dust."

"What moved me the most was the idea of a young kid stationed at a checkpoint," Springsteen said. "You've got a very, very short period of time where you have to decide about the car that's driving toward you, whether it's an innocent family, or whether it's your death coming at you… And you have to decide right, right now. There's so little room for error, and the error that you make is so very final."

Springsteen's two-part conversation with Montagne, in which he discusses songwriting, politics and his new album, airs Tuesday and Wednesday on Morning Edition.