Accessibility links
Jonesing for Fries? Blame the Cave Men Scientists studying the biology of hunger say our cravings for the unhealthy may have a lot to do with evolution. But there's hope, too: Studies of eating behaviors suggest we may be able to lose weight by eating more. 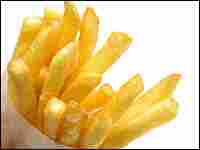 Why do we seem to relish salty, sweet, high-fat and fried foods? Scientists studying the biology of hunger say our cravings for the unhealthy may have a lot to do with evolution.

Dr. Barbara Rolls' Volumetrics concept aims to help people eat more while taking in fewer calories to control their weight. The key to this is eating foods with lower energy density.

Gary Beauchamp, director of Philadelphia's Monell Chemical Senses Center, which is dedicated to the study of taste, smell and chemical irritation, says our human ancestors were largely herbivores, and one of their primary concerns was consuming enough calories.

"Sweet things tend to be calorie-rich and tend to be high in vitamins in the real world," Beauchamp says. "Most or all plant-eating animals have evolved an ability to taste sweet compounds, particularly carbohydrates, and a liking for them."

Rolls has written a book, The Volumetrics Eating Plan, with recipes that offer ample servings of a variety of foods. She shares recipes for a sample three-course meal below:

Likewise, salt is a signal for nutrients such as sodium. As for fat, our cravings become less clear. Some studies suggest people like the buttery texture. Fat is also the richest source of calories. "One way to think about this is that people and animals learn to associate this feel with the feeling of calories in the gut -- and that association is what makes these things so attractive," Beauchamp says. He speculates that fatty acids may also enhance the sweetness of sugar and the saltiness of salt.

Similarly, an aversion to bitter foods -- including vegetables -- may have evolved from the need for early humans to avoid poisonous plants, which often tasted bitter.

Meanwhile, at the Laboratory for the Study of Human Ingestive Behavior at Pennsylvania State University, researchers led by nutritionist Barbara Rolls study environmental triggers for appetite.

Rolls' research suggests that people may overeat in part because of the desire for a variety of foods. In other words, a person who's filled up on pizza may still find room for dessert.

"In our abundant society, where we have a huge variety of very calorie-dense foods that taste really good and have a lot of textures, we can keep eating way beyond where we should stop," Rolls says.

On a day-day basis, Rolls says, people tend to eat the same volume of food -- but not necessarily the same number of calories. Her lab has been studying how energy or calorie density -- that is, how many calories are in a given weight of food -- affect satiety and weight. She says studies have found that people don't notice when their portions are increased -- but they will eat more in response.

Despite these factors, Rolls says there is hope for success. Her studies suggest the key to weight control is in choosing foods that make you feel full with fewer calories. She calls this idea Volumetrics.

Take a casserole, for example. You can lower its calorie or energy density not only by using less cheese and reduced-fat milk, but by bulking the casserole up with other foods such as vegetables, which are packed with water and fiber but not calories. Adding fruits and vegetables to most dishes will lower their overall energy density, allowing you to eat more while taking in fewer calories.