President Bush meets Saudi Arabia's Crown Prince Abdullah at Bush's ranch in Crawford, Texas. The White House wants Saudi Arabia to step up oil production to ease prices. A Saudi spokesman said the country is willing to put out more oil, but warned it may not have the desired effect. 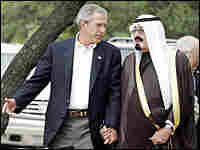