Accessibility links
Texas Cotton: 'Farmer Profits at Every Step' Georgetown University economist Pietra Rivoli spent five years studying T-shirts and what they can teach us about the global economy, an effort culminating in the book The Travels of a T-Shirt in the Global Economy. In this excerpt, she discusses how Texas cotton growers have managed to maximize their profits:

Georgetown University economist Pietra Rivoli spent five years studying what T-shirts can teach us about the global economy and its impact on our everyday lives, an effort culminating in the book The Travels of a T-Shirt in the Global Economy. In the excerpt below, she discusses how Texas cotton growers have managed to maximize their profits:

The End of Quotas and Rise of China April 27, 2005
'How Student Protests Sent a Business Professor Around the World' April 26, 2005

"Backward to Seed and Forward to Denim: Farmer Profits at Every Step"

Cotton growers have also shown an astounding ability to coax value out of cotton production by throwing nothing away and finding somebody, anybody, to eat it or buy it. Out of the 22,000 pounds of raw cotton that leave Nelson's farm in the module truck, only about 5,300 pounds is the white lint that will be turned into T-shirts. Everything else on the truck looks like garbage, and it was once garbage, but not anymore. Even the garbage produced by the garbage is now sold. The reusing, recycling, and repackaging that take place in Lubbock's cotton industry today would shame the thriftiest Depression-era housewives. And often, for Texas cotton farmers, the garbage is the difference between red and black at the end of the year. As with virtually all other aspects of cotton farming, substantial assistance has been provided by the government. While much agricultural research has been devoted to increasing the quality and quantity of cotton production, the USDA at the same time has been actively involved in research to find creative and profitable uses for everything else that arrives in the module.

In addition to the 5,300 pounds of the module's contents that are destined to be spun into cotton yarn (which in turn could produce about 13,500 T-shirts), the module also contains 9,000 pounds of bolls, stems, leaves, and dirt that have been sucked in along with cotton by Nelson's stripper (see Figure 3.5). Once a little molasses is stirred in, much of this trash becomes cattle feed, trucked just a short distance to the feedlots dotted among the cotton fields. This trivial recycling practice doesn't add much to Nelson's dividend check, of course. It does, however, turn a cost -- trash disposal -- into a revenue, however small, for Texas cotton farmers, and it is typical of the hundreds of small ways that the farmers have figured out to waste nothing and use everything.

Eight thousand pounds of the snowy white module is cottonseed. The cottonseed, like the bolls and leaves, once had an unprofitable fate as trash, dumped into gullies and streams, or burned in gigantic piles. The volume of cottonseed garbage during the 1800s became so problematic that a number of states passed laws to regulate its disposal.16 But while the bolls and leaves were still trash, in the early 1900s the seed began to move up the value chain to be used as fertilizer and animal feed. The cattle loved it, just raw. After their cotton had been ginned, farmers would keep some of the seed for next year's planting, plow some into the ground as fertilizer, and use the rest to feed their cows. Now, however, the bolls and leaves are used as feed but the seed is off to bigger and better things. Nelson still sometimes keeps some of his seed, but not usually, and not much. Today, the Reinsch cottonseed has much better things to do than stay on the farm, and thanks to the farmers' marketing efforts, it is much too valuable to use as animal feed.

Nelson's cottonseed is trucked from the Shallowater gin to the Plains Cooperative Oil Mill (PCOM), on the east side of Lubbock. The PCOM was born in the late 1930s as a desperate act of self-defense by West Texas cotton farmers, who at the time could hardly give their seed away. The West Texas seed had a reputation for poor by-products, and therefore brought low prices. Furthermore, the marketing of the seed was fragmented, with individual gins trying to negotiate with the likes of Palmolive, Wesson Oil, and Ralston-Purina. PCOM gradually proved to customers that West Texas seed by-products were in fact superior, not inferior, to those of its competitors, and also gradually consolidated the marketing efforts of the region's gins.

The oil from the seed, about 16 percent of the seed's weight, is sold to buyers in Lubbock. It comes back into the Reinsch house in Snickers bars, Ragout spaghetti sauce, Peter Pan peanut butter, Girl Scout cookies, Certs breath mints, and almost any kind of crispy snack food. The biggest buyer of cottonseed oil in the world is Frito-Lay. Connoisseurs agree that when it comes to frying chips, cottonseed oil is best. In fact, gourmet chefs increasingly tout the benefits of cooking with cottonseed oil. The National Cottonseed Products Association (NCPA) offers recipes such as "Chocolate Banana Bread Pudding with Mascarpone Caramel Cream and Banana Beignets" to anyone who might be interested. Cottonseed oil is also the primary input in the production of Olestra, a frying fat that glides through humans without leaving a trace of fat or calories, and is also an important source of vitamin E for pharmaceutical producers. And finally, the oil is also processed into "soap stock" that turns up in soaps and detergents of all kinds. Colgate-Palmolive is also a major customer.

The meal of the cottonseed constitutes almost half of the seed's weight. It contains high-quality protein and is now used to feed not just cattle, but as Dave Kinard of the NCPA told me, "just about any critter at all," including horses, hogs, chickens, turkeys, sheep, and mules. Ralston-Purina is another major customer for cottonseed meal. And recently, researchers in aquaculture (fish farming) have discovered that cottonseed meal makes a high-quality fish food.18 Catfish, in particular, appear to love cottonseed meal, and will eat it even when offered fish meal instead. Because fish stocks throughout the world are falling, driving up the prices of fish meal, and cotton production is rising, driving down the price of cottonseed, feeding cottonseed to catfish works for farmers of both cotton and catfish. And it's convenient, too, as the catfish farms in the South are close to the cotton fields. Dr. Lance Forster, a scientist at the NCPA, predicts that fish farms may soon consume 10 percent of the production of U.S. cottonseed meal.

And humans are critters, too. If current research in genetic engineering pays off, cottonseed flour will turn up in the bakery aisle in breads, cakes, and cookies. Even today, it is possible to produce a baking flour for human consumption from cottonseed meal. The problem, however, is that the cottonseed varieties that produce high-quality flour do not produce high-quality lint. As a result, farmers are unwilling to plant the flour varieties. As plant genetics research advances, however, industry scientists hope that it will be possible to breed cottonseed that produces superior flour, high-quality lint, and oil, so that almost every ingredient in a birthday cake can be produced with the leftovers from Nelson's cotton production.

Approximately 30 percent of the cottonseed's weight is in the hull, or outer covering. Like the cottonseed meal, the hulls show up in animal feed. But they are also used in the production of fertilizer, garden mulch, and soil conditioner. And in some regions, cottonseed hulls are processed into oil-drilling mud, a sticky, industrial-strength type of Play-Doh that is used to plug leaks in oil wells.

And finally, a ton of cottonseed will contain about 150 pounds of "linters,"which are tiny bits of cotton fuzz that are stuck to the seed after ginning. The oil mill scrapes off the tiny fuzzy bits with microscopic saws and turns them into big bundles of fuzz to be sold. The fuzz turns up again in throw pillows, automobile upholstery, mops, candlewicks, blankets, mattresses, twine, rugs, and medical supplies. Linters are also used in the production of cellulose and viscose, which turns up in toothbrushes, ballpoint pens, picnic cups, and almost any item made of hard plastic. The cellulose from the linters is also found in cheaper brands of ice cream, where it is used to improve texture and reduce ice crystals. Linters are also used in hot dog and sausage casings, as well as writing paper, and in most countries, paper currency. And for those with sensitive skin, an environmental conscience, or both, "tree free" toilet paper made from cotton linters is now available. The toilet paper, according to entrepreneur Willy Paterson-Brown, is "reassuringly expensive."

In October 1999, PCOM merged with the Yazoo Cotton Oil Mill and the new entity, the Plains Yazoo Cotton Oil Mill (PYCO), markets about one-third of the cotton oil produced in the United States.21 The Plains Cooperative Mill in Lubbock is the world's largest cottonseed oil mill, receiving about 1,200 tons of seed per day from the region's gins, and churning out the makings for peanut butter, soap, and throw pillows.

The PYCO oil mills have quite a monopoly on acquiring seed from the region's gins, which would appear to give the farmers little power in marketing their seed. But the Shallowater gin, along with about 175 other gins across the South, own PYCO, and the Reinsches, of course, own a piece of the gin. The income from the world's largest oil mill, then, is paid to the region's gins, which in turn pass it through in dividends to growers like Nelson and Ruth.

So, Nelson doesn't throw away his cottonseed anymore. Instead, he gets a tiny dividend every time city folk spread peanut butter on their toast.

Excerpted from The Travels of a T-Shirt in the Global Economy, by Pietra Rivoli, copyright 2005. This material is used by permission of John Wiley & Sons Inc. 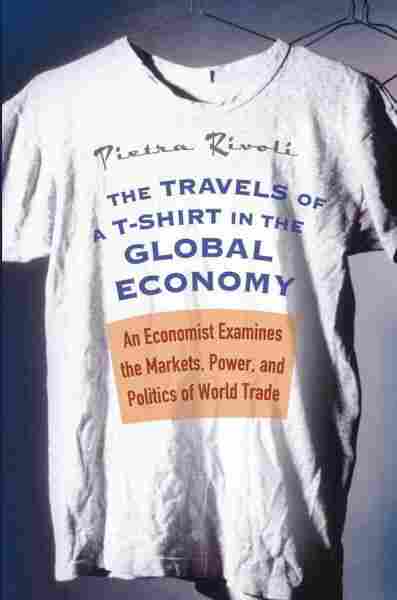 The Travels Of A T-Shirt In The Global Economy

An Economist Examines The Markets, Power, And Politics Of World Trade

Title
The Travels Of A T-Shirt In The Global Economy
Subtitle
An Economist Examines The Markets, Power, And Politics Of World Trade
Author
Pietra Rivoli