Accessibility links
There Is Such a Thing as Truth Academy Award-winning director Errol Morris explains the childhood incident that launched his lifelong quest for the truth. It's a lesson that has guided his career as a documentary filmmaker.

Listen
There Is Such a Thing as Truth

I believe in truth. And in the pursuit of truth. 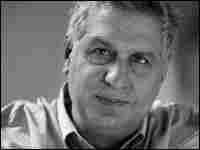 Errol Morris is an Academy Award-winning documentary filmmaker whose works include The Thin Blue Line, A Brief History of Time and The Fog of War: Eleven Lessons from the Life of Robert S. McNamara. He is also the director of a number of critically acclaimed television programs and commercials.

When I was 10 years old, I asked a neighborhood kid who was older than me, "Which city is further west: Reno, Nev., or Los Angeles?" The correct answer is Reno, Nev. But he was convinced it was the other way around.

He was so convinced that Los Angeles was west of Reno that he was willing to bet me two bucks. So I went into the house to get my Rand McNally Atlas. The kid looked at the atlas and said, "The map is drawn funny." It wasn't. Was his argument that the map didn't preserve east, west, north and south? What kind of map would that be? I showed him if you trace down the 120-degree west line of longitude -- which runs almost directly through Reno, Nev. -- you end up in the Pacific Ocean, somewhere west of Los Angeles.

He replied that lines of longitude don't cross the ocean.

What? I told him that the lines of longitude were there to indicate how far west or east some location was, regardless of whether it was on land or on sea.

There was one insurmountable problem, however. He was bigger than me.

I drew a number of conclusions from this story.

There is such a thing as truth, but we often have a vested interest in ignoring it or outright denying it. Also, it's not just thinking something that makes it true. Truth is not relative. It's not subjective. It may be elusive or hidden. People may wish to disregard it. But there is such a thing as truth and the pursuit of truth: trying to figure out what has really happened, trying to figure out how things really are.

Almost 15 years ago, I stumbled on a story about an innocent man, a man who had been sentenced to die in the Huntsville, Texas, electric chair. And through hard work, luck and a certain amount of pathological obsession, I was able to make the movie The Thin Blue Line and to help get him out of prison.

What kept me going was the belief that there had to be answers to the questions "Did he do it?", "Was he guilty or innocent?", "If he didn't do it, who did?" and that I could find an answer to these questions through investigating.

All I know is I never got my two dollars.

Errol Morris on the Web