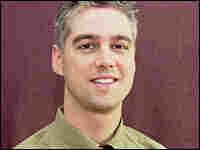 Nick Anderson has been drawing politically edgy cartoons since he was 15. hide caption

Editorial cartoonist Nick Anderson has won both fans and awards for the edgy messages often found in his seemingly conventional drawings. 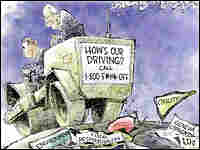 This cartoon from June 2004 was among those submitted to the Pulitzer committee. Nick Anderson/Courier Journal hide caption

His ideas -- and the way he presents them -- recently led to a Pulitzer Prize for Anderson, who at 38 is a syndicated cartoonist based at The Courier-Journal in Louisville, Ky. His cartoons have appeared in Newsweek, The New York Times and The Washington Post, among other papers.

In winning the award, Anderson beat out Garry Trudeau, creator of the Doonesbury cartoons, and Don Wright of The Palm Beach Post.