Accessibility links
Fiesta Food Food writer Bonny Wolf shares the secrets of Cinco de Mayo and a recipe for a tradtional Mexican mole poblano. It's a sauce of peppers, spices, seeds, garlic, onions, almonds and chocolate served over turkey. Wolf promises it works, and it's not hard to make. 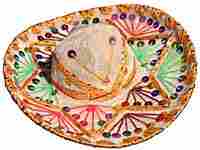 Bonny Wolf is a regular contributor to NPR's Weekend Edition Sunday. She is working on a book of food essays to be published by St. Martin's Press.

Many revelers either don't know what they're celebrating or think it's the Mexican Fourth of July.

Not exactly. Mexican Independence Day is a big holiday south of the border, but it's Sept. 16, the day when, in 1810, Mexico won its independence from Spain. Cinco de Mayo, a lesser holiday, celebrates the victory of hugely outnumbered Mexican troops over the French at the Battle of Puebla on May 5, 1862. (Mexico won that battle but lost the war; France went on to occupy the country for the next five years. But I digress.)

Here in the states, smart marketing has turned Cinco de Mayo into a day to celebrate Latino culture. And culture, of course, means food.

This complex cuisine has ancient roots and goes far beyond tacos and enchiladas. The Mexican table reflects influences of the Aztecs and the Mayans as well as the Spanish and the French.

To celebrate Cinco de Mayo beyond the margarita, Puebla -- the site of its famous battle -- is a good place to start. This colonial city near Mexico City is also the birthplace of Mexico's national dish.

When I first heard about mole (pronounced MOH-lay) poblano de guajolote, I was skeptical. A sauce of peppers, spices, seeds, garlic, onions, almonds and … chocolate? Served over turkey? But trust me, it works, and it's not hard to make. It's like making curry.

Mole poblano -- which roughly translates to a pepper concoction -- is a rough, velvety brownish-reddish mixture, made of at least 20 ingredients that all, somehow, come together as a delicious, earthy sauce. The little bit of chocolate does not make the sauce sweet. It nicely blends with the spicy, nutty, fiery tastes of the other ingredients, and adds richness.

There are a number of stories about the origins of mole poblano. The one I like best lays its invention at the door of the Dominican nuns at the Convent of Santa Rosa in Puebla in the 1600s. The nuns were told at the last minute to prepare something for a visiting viceroy. So they threw the chiles and chocolate of Mexico in with the almonds and spices of Spain and served it over turkey, also a native of Mexico. The word mole comes from the Aztec word for concoction or sauce.

Mole poblano is the centerpiece of special fiestas across Mexico. Each region has its own special chile-based sauces. Oaxaca is called the land of seven moles for its versions that come in greens, yellows and black, depending on their ingredients.

Recipes for moles can be complicated or very complicated. It's a special sauce served on special occasions -- fiesta food. But mole can be made in stages over several days, and is even better prepared a day in advance.

Serve with green rice, margaritas or cold Mexican beer, and you'll have a spread fit for a viceroy.